This two parter sees the threat of the pilot episode come back to wreak revenge on Sonny Crockett (Don Johnson) and Ricardo Tubbs (Philip Micheal Thomas). The first episode, originally aired as The Hit List was written by Joel Surnow, and first broadcast on 19 October, 1984.

Sonny is due in court for a divorce hearing in his ongoing story arc with his estranged wife Caroline (Belinda Montgomery) while the rest of the team are conducting surveillance on a dealer. While the pair work out details, including trying again, other things are going down in Miami.

The dealer is hit, by an assassin (Jim Zubiena) masquerading as a chauffeur. It soon comes to light that this assassin, one Ludovici Armstrong by name is contracted by Calderone (a now bearded Miguel Pinero), and he has a list of names he’s working through, A list that includes Sonny’s.  Calderone is intent on claiming the territory stolen from him after Brothers’ Keeper and getting rid of those who wronged him.

Lt. Rodriguez (Gregory Sierra) who sees the list, wants to put the Crocketts under protective custody. He’s also in the way when Armstrong takes a shot at Sonny, causing him to end up in critical condition in the the hospital..

This episode features the 80s classic I’m So Excited by The Pointer Sisters, Tush by ZZ Top, and In the Night by Russ Ballard. It’s also the first appearance of the iconic Crockett’s Theme by Jan Hammer which will recur throughout the series.

The final showdown tears up the Crockett house, and probably a good portion of the re-blossoming marriage.

There’s a thought that occurred to me watching the bar sequence in this episode, that all the cutaways to the crowd showed rather solemn faces. Shouldn’t they be happy, and drinking and flirting, and dancing? Just some odd choices.

The episode comes to a conclusion with Lou Rodriguez dying in the hospital, Caroline and Billy leaving with a rescheduled divorce, and Crockett and Tubbs planning on heading to the Bahamas to hunt down Corleone.

After shaking loose Calderone’s location in the Bahamas, Crockett and Tubb take the Stinger speedboat to the islands (shooting on location), with orders to surveil only. But they get involved quick, and Tubbs finds his loyalties divided when he meets Angelina (Phanie Napoli) – who is she to Calderone? And who is she to Tubbs? And can the local cops be trusted?

Crockett, meanwhile, is masquerading as the hitman, and demands a meet with Calderone. But on an island that small, how long until their cover gets blown?

The episode races to a climax that puts Angelina and Rico’s relationship right in the crosshairs.

The music this time around includes Voices by Russ Ballard, and What’s Love Got to Do With It by Tina Turner.

Next week, we continue to dig into the seedy underbelly of Miami… Vice. 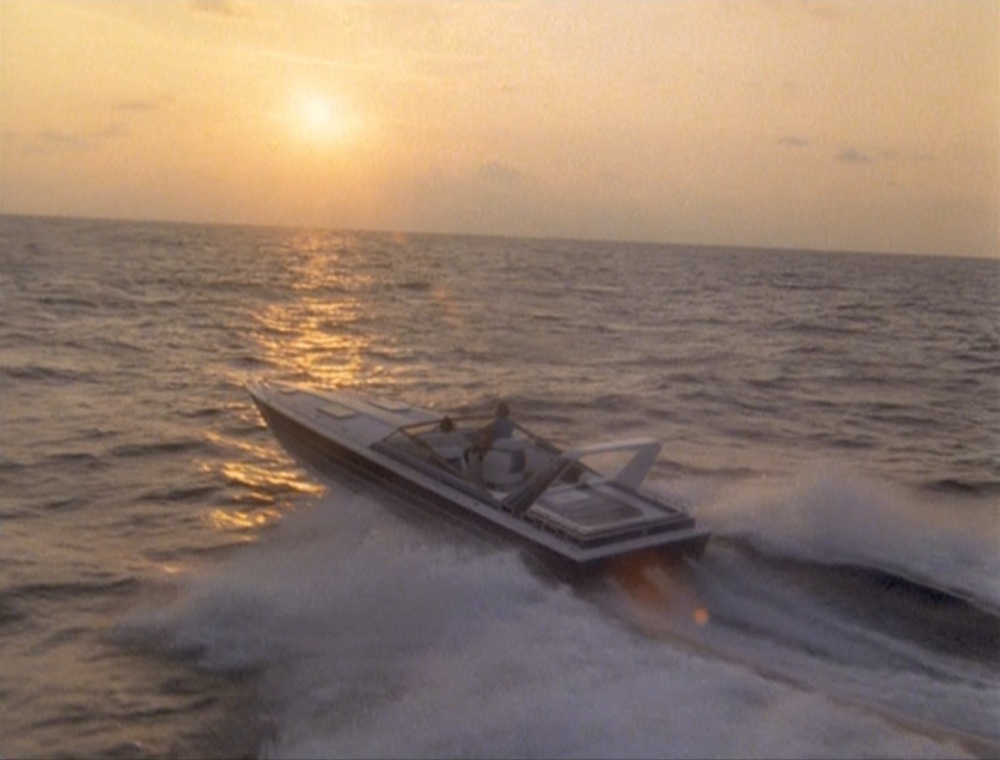