So how can you make learning fun, and ensure that the entire family is entertained? Combine education with entertainment, with movies, and pop culture! Illustrate how those flickers of images up on the big screen, that have made us laugh, cry, gasp, and thrill have not only affected us as viewers, but the technology around us, things we use every day. Things first glimpsed in novels and movies that seemed miraculous at the time, and are now part of everyday life.

Presented in part by those wonderful folks at DK Canada, POPnology brings a fascinating exhibit to life that shows how science fiction has been predicting the future (sometimes with an eerie sense of prescience).

Housed in the level 2 Proctor & Gamble hall of the Science Centre, there are secrets and cinema magic spirited away into every corner, and knowledge spilling from displays and very recognisable props and models.

There are a number of highlights to the exhibit, but if I could make a recommendation of where to start, this will serve to fire nostalgia in the older crowd and disbelief in the younger ones. There is a room put together near the fore of the exhibit that depicts 3 April, 1983 – A Day Without Smartphones. 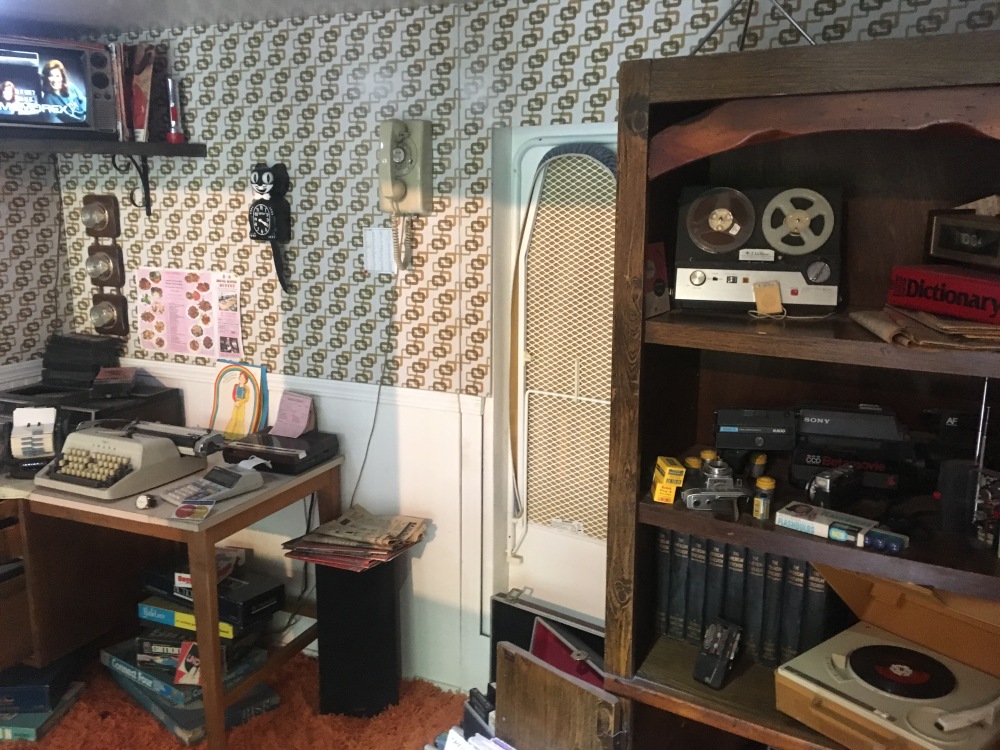 This set up, is amazing, everything in the room is recognisable to everyone who lived through the time. It will elicit smiles as memories are brought to the front of mind, and then there will be a stunning realisation that everything in that one room can now be contained in one pocket-sized smartphone.

There is a look at the rise of artificial intelligence, with a questionable example… the HAL 9000 from 2001: A Space Odyssey. I’m not sure a potentially homicidal computer is the best example of A.I. (of course I know he was suffering from conflicting orders, but still).

There is also hints of the not quite happened yet, like a hoverboard with sneakers (power-laces, all right!) that haven’t quite materialised in the real world yet, not to mention a massive time machine taking up a corner of the exhibit… a Mr. Fusion equipped DeLorean.

But, ahhh! It is electric!

There’s an examination of robotics in film through the decades starting with Metropolis, and running all the way through to Wall-E, and you can see how designs, and creations affected robotic creations today that are exploring Mars, as well as learning here on Earth. There’s a familiar Cyberdyne T-800 endoskeleton, and a friendly astromech to be seen.

There’s the idea of contacting aliens, and calling home, and there’s a fascinating gallery of the minds, and imaginations that helped influence the look and design of not only the 20th century, but the 24th…

It’s rather amazing to think how things that were created as storytelling devices, or just something to look cool on screen, have influenced not only cinema, but the imagination of creators and designers who brought those concepts into existence in the real world.

And while not all these wonderful (and sometimes frightening) things have come to life they have definitely influenced the world around us. Now, Nemo’s Nautilus may not exist, and the robot from Metropolis may not be stalking around manipulating people, but people have seen them, and countless others designs in science fiction films and worked to bring them to life.

Star Trek has always been the best example of that… the Original Series communicators directly influenced the look of cellphones, the idea of a medical bed that scans in a non-invasive way has been a medical goal for years, and of course there is the Xprize for a real life tricorder.

And with all the amazing things there, it’s incredibly hard not to geek out, but I tweeted out in sheer joy when I came across the helmet, and jet pack from The Rocketeer! (Man, do I love that movie and comic!).

POPnology is a fascinating exhibit, and a lot of fun, I think it could be even larger, a massive, sprawling exhibit documenting everything, but this one definitely enlightens, informs, and tantalises – inspiring those who venture through it to seek out more, and maybe watch some classic films at the same time.

If you’re looking for something fun to do for the whole family this summer, check out the POPnology exhibit at the Ontario Science Centre and then tour the rest of the complex, there is so much to do, and it can inspire a fun sense of learning.

DK Canada partnered with the OSC to bring this exhibit to us, but it’s only for a limited time, it closes up on August 6 – so check it out now!