Airing on 16 November, 1992, The Quality of Life feels pretty familiar to previous episodes. Written by Naren Shankar from material by L.J. Scott, this episode sees the Enterprise arriving at Tyras 71 to help out in a mining project taking place there.

Working from an orbital platform the mining facility is experimenting with a series of robots known as exocomps. Geordi (LeVar Burton) and Data (Brent Spiner) become concerned when it appears that the exocomps may have achieved a form of sentience.

This is illustrated when they act in self-preservation, and refuse orders that would place them in danger.

Captain Picard (Patrick Stewart) and the crew get into a debate on what defines life, and whether or not the exocomps are alive.

Data is the only one who, through it all, is convinced of the robot’s sentience. The robots finally perform an action of self-sacrifice, but will it be too late? And how far will Data go to prove that his supposition is correct? Even when Picard and Geordi’s lives hang in the balance?

Jonathan Frakes directs this episode, and consequently, his character, Riker, is kept to a minimum, but makes a fun appearance in the episode’s teaser that features a game of poker featuring Riker, Crusher (Gates McFadden), Geordi (with his final bearded appearance) and Worf (Michael Dorn) where the men’s beards and the doctor’s hair colour enter into the betting.

While the episode’s subject material may be familiar, it’s still executed in an enjoyable way. 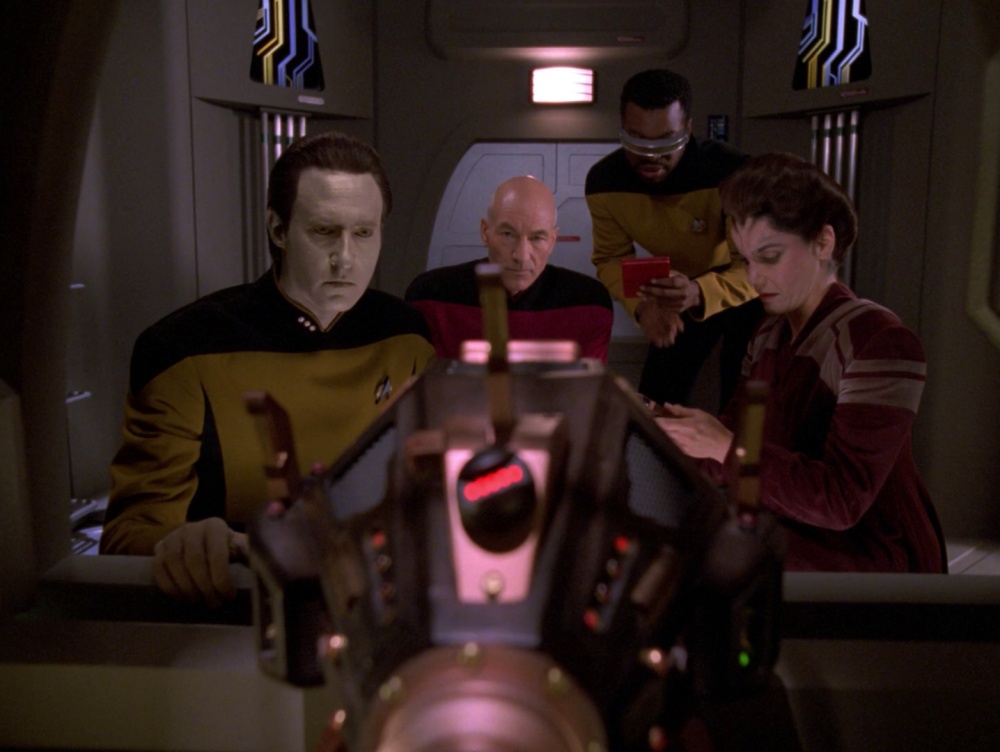 This classic episode first aired on 14 December, 1992. Ronald D. Moore crafts the teleplay from a story by Frank Abatemarco and it’s a whopper. Captain Picard, Worf, and Crusher are recruited for a secret mission into a Cardassian base to stop a biological superweapon from being developed.

This necessitates Picard relinquishing command of the Enterprise, which is taken over by a strict new captain, Edward Jellico (Ronny Cox) who is the officer who finally orders Counsellor Troi (Marina Sirtis) into uniform.

The trio train for their mission, and bribe a Ferengi to get them to their destination, but soon fall afoul of a Cardassian trap, created by Gul Madred (David Warner).

The changes that Jellico bring on the Enterprise are troubling as it really throws the viewer off-balance. For six years we’ve believed the Enterprise has been the primary ship of the line, but in five minutes Jellico tears everything apart and changes all of it.

While Jellico, Riker and Troi negotiate with the Cardassians, Picard is threatened with torture, lead us to a stunning cliffhanger.

This is an outstanding episode, shaking the viewer up constantly, and leaving all of our characters in situations we’re not sure they can deal with.

The Human Adventure continues next week, with the fantastic conclusion to this episode, and we also enjoy the launch of the next series – Star Trek: Deep Space Nine!