This week I dove into the ninth season of the Comedy Central series, South Park on blu-ray, available now from Paramount Pictures.

Over the course of fourteen episodes we get more comedic tales featuring Cartman, Kyle, Stan, Kenny, Butters, Jimmy and the gang, including the highly controversial, and incredibly enjoyable, Scientology episode, Trapped in the Closet.

Continuing to show that no cow is sacred, the season takes on all comers from dealing with sex-changes to  animal freedom to alcoholism, gingers, gay rights, and untimely erections.

It speaks well of the series, its writing, and its creativity for a cartoon series, aimed at adults to still be on the air after nine years (or twenty-one in this series case).

I love that the series remains unafraid to take on any subject, but the crowning point for the season is undeniably the Scientology episode which portrays the actual beliefs of the cult. Of course it was bound to offend and did, causing the actor who played Chef (Isaac Hayes) to leave the show. 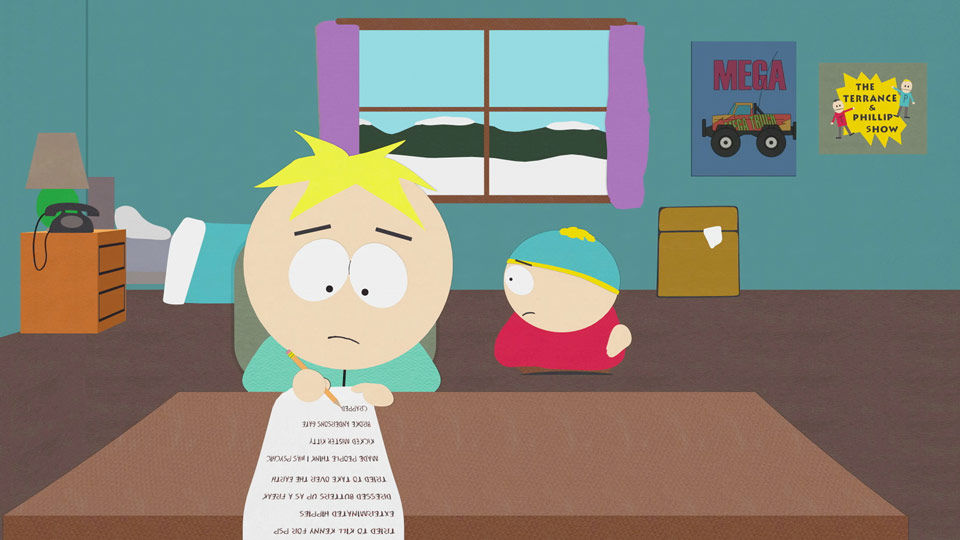 It also garnered the show an Emmy nomination for Outstanding Animated Program.

The characters continue to evolve, Mr. Garrison gets himself a sex-change and becomes Mrs. Garrison, the boys are quicker to catch on to Cartman’s plots and ploys because they’ve been through it before, and there are callbacks aplenty for the series.

The opening titles have been updated again, and changes partway through the season, highlighting moments from this and the previous season.

I have to admit, for the longest time I couldn’t be bothered withe show. I was there for the first couple of seasons, I saw the film in the theatre, but fell out of the series right after that. It felt like the show was everywhere, that culture had become super-saturated with it. Consequently I grew tired of it.

Now, coming to it a couple of decades on, and being able to watch and enjoy it at my own pace, only sharing my opinion on it once a week, it has done wonders for my appreciation and enjoyment of the show.

Over theses past weeks, I have learned to truly enjoy the show… I even went out and bought the game for my PS4.

I don’t miss watching the show as it aired, I like coming to it like this, and doling out episodes at my own pace, and I am enjoying it all the more because of it.

The blu-ray looks and sounds great, and has made itself a welcome addition to my collection.

And you can add it too! As seasons one through eleven are now available on blu-ray from Paramount Pictures!!