Who would have thought that Disney could turn one of their oldest theme park attractions into a tentpole franchise back in 2003? Sure the series has floundered, and perhaps overstayed its welcome since, but that first film, directed ably by Verbinski, with a definitive score by Klaus Badelt, and featuring an A-list cast delighted audiences around the world.

Despite the fact that Captain Jack Sparrow (Johnny Depp) became the de facto star of the series, he is more akin to a supporting player in this film, or at least a shared lead with Orlando Bloom’s Will Turner, and Keira Knightley’s Elizabeth Swann.

The film walks a fine line between adventure, comedy and the supernatural as the Caribbean port where Elizabeth resides with her father, the Governor (Jonathan Pryce) is attacked by Barbossa (Geoffrey Rush) and his crew, all undead, manning the Black Pearl, formerly under the command of Sparrow.

They are drawn by a medallion held by Elizabeth, that she took from Will as a child. It is cursed, and they must all be gathered and returned if Barbossa and his men are to ever be returned to life.

Jack and Will form an uneasy alliance to regain the Pearl and Elizabeth, but get caught up in stopping Barbossa, eluding the British government, and a would be spurned suitor of Elizabeth’s, Norrington (Jack Davenport). 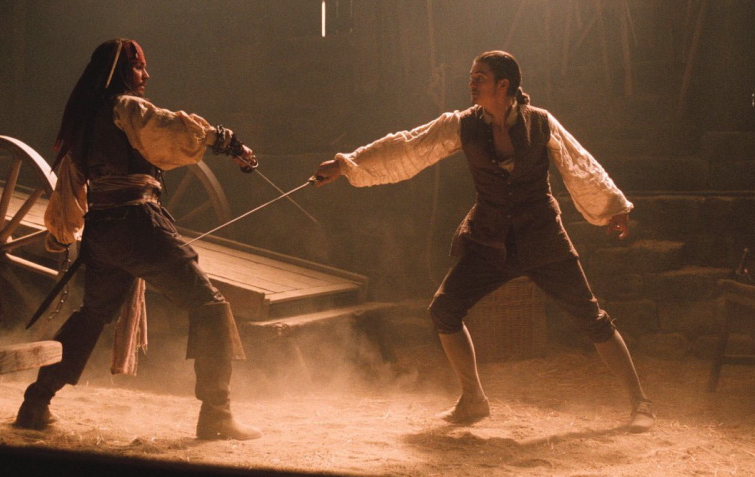 The movie is nothing short of spectacle, and launched Depp into superstardom, and the rudder of the franchise.

Taken on its own, and ignoring everything that came after, the film stands on its own brilliantly, is incredibly entertaining, and pulls out all the stops to give the audience a theme park thrill ride in the form of popcorn fare.

This is summer blockbusting at its most primal. It is a vast epic that knows it’s not going to change the world, it’s just there to entertain.

With this film, Disney did something that hadn’t been done for decades, they made pirate movies popular entertainment again. The creative minds behind the film did a nice job combining genres, and Verbinski makes them all work, balancing drama, action, comedy and horror easily.

The effects have surprisingly weathered the years fairly well. The reveal of the true nature of Barbossa and his crew still works very nicely, and then it’s juxtaposed with a comedic beat. In fact most of the film works that way, tilting, almost drunkenly, but always pleasingly from one genre to the other, wrapping it all up in a pirate’s scarf, a jaunty hat, and a striking sword.

This is a romp that remains a joy to watch.