It’s time for another trip to the small Colorado town of South Park, as I dive into Season Seven of the enduring Comedy Central cartoon show. Released by Paramount Pictures, the Complete Seventh Season on blu-ray gives us a huge dose of comedy over the course of its fifteen episodes.

This time out series creators Trey Parker, and Matt Stone turn their satirical eye on a new number of topics, as well as skewering recurring ones. Stan, Kyle, Cartman, and Kenny find themselves stuck in a repeat, and encountering all manner of adventures.

Up this time are solid, and entertaining homages to Silence of the Lambs, Say Anything, and a fantastic Christmas episode with tons of music that celebrates Canada, family, and The Wizard of Oz.

And stunningly, Kenny survives the entire season (almost) and it makes for a brilliant laugh.

There is also an iconic episode, All About Mormons, that feels like the testing and proving ground for their musical, The Book of Mormon.

Over the course of two discs, we get to learn more about the characters, and the small town, we get a look at the sexualization of women, and girls, when the boys visit a restaurant called Raisins and learn how dangerous flirting could be. 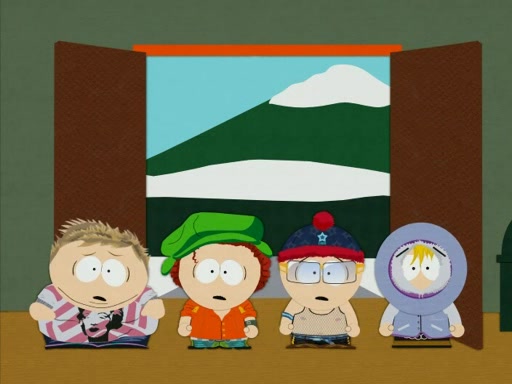 We also get a introduction to some new characters, the Goth kids. Butters imparts some wonderful wisdom to Stan, the boys become junior detectives, and Timmy and Jimmy become gang members.

This season continues the series track record of hiding their message, under the juvenile, crass humour, that is a signature of the show. The laughs keep coming, and their are some incredibly hilarious moments – you can’t help but laugh when Cartman, eager to attend Kyle’s birthday party, arranges for Butters to go missing, so he can’t attend. They also confront the dangers of smoking, and deal with metrosexuality.

The songs written for the series are sharp, and show a growth in the writing that lends to the show’s endurance. They are also surprisingly catchy.

The show has grown incredibly from its humble beginnings, where the series just focused on the four boys. Now, we are invested in the entire town, know almost all the residents, their parents, their teachers, and the events in their lives. It’s a strange little town, and there are some very odd occurrences that happen there.

Missing this year is an appearance from Mr. Hankey, but the Christmas episode survives solidly without his appearance.

The extras include commentaries on the episodes by Stone and Parker, and they are often insightful, and very funny. The series continues to entertain, and doesn’t seem to be running out any time soon.

South Park: The Complete Seventh Season is available on blu-ray from Paramount Pictures now! Check it out, as well as seasons one through eleven!