Written by Jeri Taylor from a story by Michael Piller and Rick Berman, the first part of this crossover two-parter first aired on 4 November, 1991.

With the final voyage of the original Star Trek crew preparing for release in December (Star Trek VI: The Undiscovered Country), and the death of series creator Gene Roddenberry, this episode was penned to bridge The Original Series and The Next Generation.

Captain Picard (Patrick Stewart) and Data (Brent Spiner) are sent, undercover, to Romulus to bring back the Federation ambassador who may be defecting. At the very least he is on an unapproved mission.

That ambassador? Spock (Leonard Nimoy) – who doesn’t appear until the final moments of the episode, giving us our cliffhanger ending.

Still, it’s a solid episode, as we get a final moment with Spock’s father, Sarek (Mark Lenard), whose illness is incapacitating him. Picard receives word after meeting with Sarek, that the great man has succumbed to his illness. It’s a stark echo of real life events with Roddenberry’s death.

Spock, however, may be walking into a trap, as Sela (Denise Crosby) may be manipulating things behind the scenes.

Spock has traveled to Romulus in an attempt to unify the Vulcans and Romulans – two distantly related races, an echo of his actions in Trek VI where he is working with the Klingons to achieve peace.

Despite the fact that Spock’s appearance is held back until the final moments of the episode, the rest of it is incredibly well-crafted and makes for a standout episode.

Well, most of it. The b-story with Riker (Jonathan Frakes) and the Enterprise is forgettable. They are tracking down a line of inquiry that suggests retired starships stowed in a depot yard are being sold off and ending up in enemy hands. 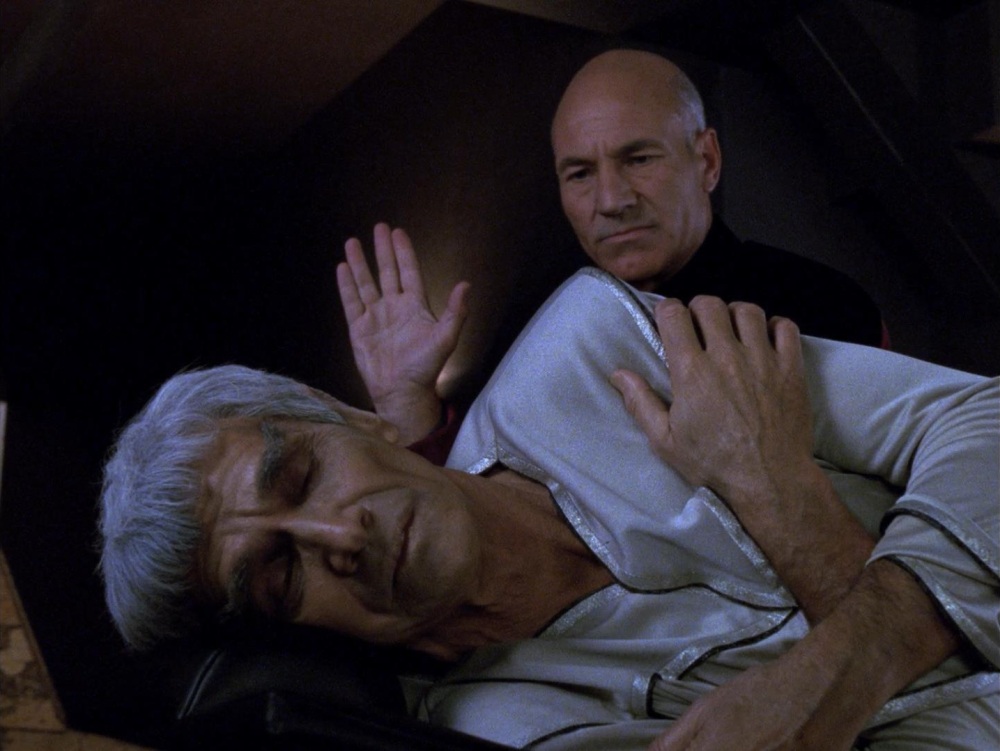 Airing on 11 November, 1991, Michael Piller pens the conclusion of the story that he and Berman came up with.

Now that Spock is in the picture, the story kicks it up a notch with some action beats as Picard, Data and Spock form a solid triumvirate even as they are betrayed and captured by Romulan forces.

There are references to cowboy diplomacy and some nods to the Original Series as well as the forthcoming Undiscovered Country.

It’s something to not only see Nimoy as Spock, and also see he and Stewart share scenes together.

Riker and the Enterprise crew continue with trying to solve the mystery at the supply depot. It leads them to a disreputable bar, a dangerous Ferengi.

Both stories tie together as we learn the Romulans are buying stolen equipment to send an invasion force to Vulcan. But thanks to Spock everything works out well, even as he continues his mission to unify the two races (which also sets up a future film).

There is some solid continuity as well as goofy asides like Data performing the Vulcan nerve play pinch. The ending though, featuring a poignant mind meld, should go down as a classic moment for the series.