I’m spending a little more time with French director Jean Vigo as I continue my exploration of the continually enthralling, and informative The Movie Book from DK Canada.

The next film of his I take a look at is the short, A Propos de Nice. Shot in 1930, the film seems, at first, to be little more than a travelogue as we are treated to aerial shots of Nice, and dizzying camera moves around trees and people.

Fairly quickly, it turns into a bit of a satiric look at the upper class, in fact, one could argue it works as an indictment the further into the short the viewer journeys. Those taking their leisure in Nice are seemingly oblivious to those who not only work in the city, but those who languish in it, struggling in day to day life; the poor, the scarred, the abandoned.

Images play in counterpoints as we get glimpses of the wealthy intercut with crocodiles, and other animals. Through it all, they seem only worried about the surface imagery of a thing, while refusing to recognise that under it all, we’re all the same – something the film illustrates, literally.

They sleep, sprawled in chairs, while people work and entertain around them, they ignore others they pass on the street. It would be a revelation, if one wasn’t already aware of how self-absorbed we can be as individuals and as a species.

The opening, travelogue nature of the film provides a unique slice of life of a famed city untouched by the ravages of the occupation that would take place with the advent of the Second World War. Watching the way the world was, it does look beautiful, but as mentioned above, that is just a surface image. Beneath it, the beauty has a dark side, much like every other location in the world. There is the good and the bad, the beautiful and the ugly, sometimes existing in places you least expect.

That is one of the things I most enjoy about some of these older, short films. the documenting of life in another time, seeing how much things have changed, and wondering at those that haven’t.

A Propos de Nice is an fascinating glimpse of another time, while reminding us that we are all human, and should be aware of others, ourselves, and take pleasure in the beauty that surrounds us, no matter where we find it.

Yet another film, not to mention director, that I would never have heard of, if DK Books hadn’t introduced me to The Movie Book – pick one up today, and check out the films you love, and the ones you’ll love that you’ve never heard of! 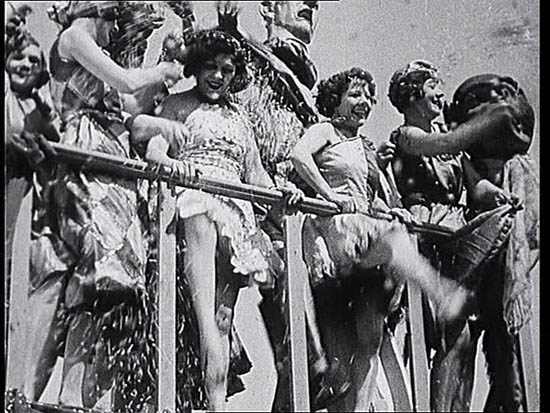