The Survivors was written by Michael I. Wagner and sees the Enterprise summoned to the remote planet Rana IV in response to a distress call. Once there, they discover that the entire planet is destroyed, except for one small plot of land, and two survivors.

As Rker and his away team delve into the mystery a recurring melody, somehow connected to the planet and the survivor inhabits Counsellor Troi’s (Marina Sirtis) mind and pushes her to madness.

The truth of what occurred on the planet, even as the alien ship that destroyed it returns time and again to menace the Enterprise, eventually comes out, making for a smart and poignant story.

I love the history we are given on Kevin and Rishon and it makes the story so much stronger because of it, and everyone seems to be on point for this episode. It’s solid, well-crafted, and watching Picard figure out what is really going on makes for some nice character beats.

Worf gets to deadpan a little, Troi gets a new dress (a very nice blue number) and everything about this episode looks great. The third season was real Trek, and left some of the shoddier episodes of the first two seasons in the past.

Airing on 16 October, 1989, Who Watches the Watchers is one of my all time favourite Next Gen episodes.  Written by Richard Manning and Hans Beimler, the story is a great look at why the Prime Directive is important, and what happens when the observers are discovered.

The Enterprise arrives in orbit around Mintaka III to provide assistance to an anthropology team who are studying the planet’s inhabitants (a bronze age level of proto-Vulcans). When their holographic hide is discovered by Liko (Ray Wise) and is subsequently injured he is beamed to the starship for medical attention and a a memory wipe.

Unfortunately, the memory wipe doesn’t take place, and he recalls the all-powerful Picard – who appears with his ship’s and crews’ abilities to be a godlike being to their culture.

Picard is deified and when Riker and Troi, altered to look like Mintakans, beam down to find the rest of the team, they discover this, and the pair fall into trouble when it is believed that Troi should be sacrificed to appease Picard.

What will Picard do, and how badly will he break the Prime Directive to keep his crew safe?

And from a geek point of view, it’s very cool that Star Trek, once again returns to Vasquez Rocks in California.  Also very cool is the fact that the tapestry Picard is presented with at the end of the episode is seen repeatedly throughout the series and films, establishing some wonderful character continuity. 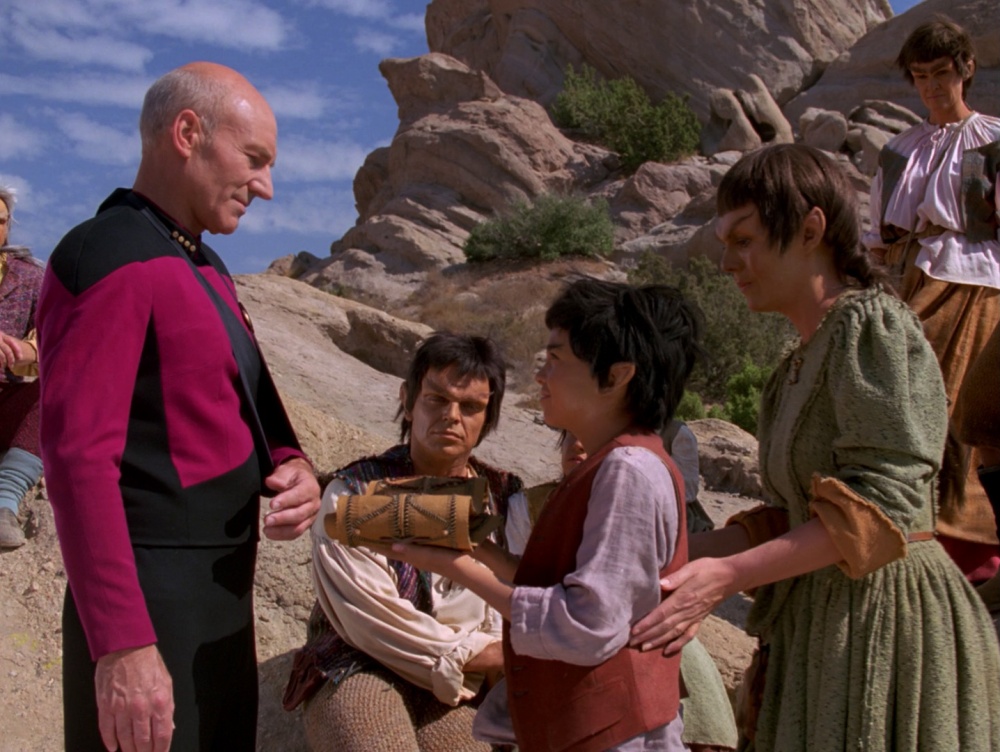