Buckle up, there’s the sign post up ahead! It’s time to return to The Twilight Zone, courtesy of Paramount Pictures The Complete Series on blu-ray.

First up is The Gift. Written by series creator Rod Serling, this episode debuted on 27 April, 1962.

Williams (Geoffrey Horne) is an alien. He just crashed south of the Rio Grande, in Mexico. During an altercation a police officer is killed, but Williams connects with a young boy, Pedro (Edmund Vargas).

He arrives in a small village with the promise of a gift, but the villagers are scared of the alien’s generosity and can’t help but to wonder what it means for humanity.

Williams languishes on Pedro’s cart, injured during the altercation. Pedro and Williams talk, become friends, understand one another, but the police arrive, and they and the fear of the unknown which sweeps through the village may lead to a tragic end.

It is made more tragic revelation of what the gift was.

This is a solid, quiet episode, that hints at the paranoia and fear that can sweep any and all, hold us, not only a village, but all of us, the entire race of humanity.

The extras include sponsor billboards and an isolated score by Laurindo Almeida.

The Dummy features a teleplay by Serling based on a story by Lee Polk. It first aired on 4 May, 1962. In case you missed it in the title, this one is about a ventriloquist’s dummy, and if that isn’t enough to creep you, check out this story.

Jerry (Cliff Robertson) may have been doing his act for too long. He’s become convinced that his dummy, Willie, is alive, and not only alive but evil. Locking Willie in a trunk, he seeks out a new dummy, but Willie is really not okay with that.

Robertson is always turns in an enjoyable performance, and this his second return to the Zone, is even more engaging than his earlier one.

Dummys can be very disturbing, and even though it’s all an act, and I know how things are done, the fact that Willie looks like he’s moving, and watching Jerry is unnerving. Of course, no one believes him. They think it’s part of the act, and it doesn’t help that Jerry seems to have a drinking problem.

This one ends up being a very well-crafted episode. It’s creepy, gets under your skin, and this would be one of the episodes that stays with the viewers, especially the younger ones for a long time. Especially when you take into the account the ending, I’m sure that would be something that would scare a lot of people, heck, it could even cause nightmares for some.

The extras include commentary by Robertson, an isolated score, billboards, and radio version starring Bruno Kirby.

Richard Matheson pens the last episode of the week, Young Man’s Fancy. This story originally aired on 11 May, 1962.

Alex Walker (Alex Nicol) is a newlywed, and he and his wife, Virginia (Phyllis Thaxter) are returning to his childhood home to arrange for its sale. When Alex returns to the house, Henrietta’s presence, one that was always domineering and smothering may still be there.

Virginia begins to fear for Alex as he is drawn back to his room, and all its contents. And the story becomes a bit of a haunted house tale, as Alex falls into his old life, and recalls and longs for his mother.

The extras include an isolated score by Nathan Scott and sponsor billboards.

Next week, our journey through season 3 of The Twilight Zone comes to an end, but there are two more seasons to explore in Paramount Pictures’ The Complete Series on blu-ray, including some all time classic episodes! Check it out! 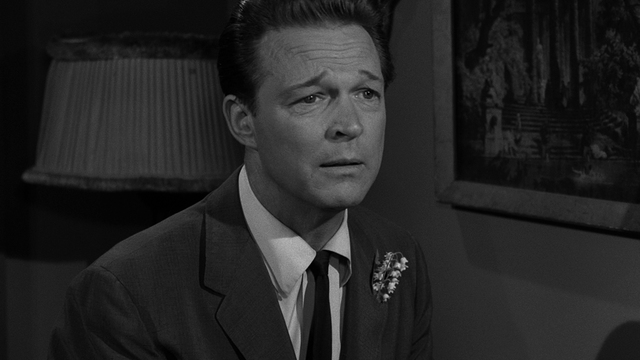