Set decades (78 years altogether) after the events of Kirk and company, Star Trek: The Next Generation first aired on 28 September, 1987. Launching us into the 24th century, a script by series creator Gene Roddenberry and D.C. Fontana introduced us to an all new U.S.S. Enterprise, a Galaxy-class starship, and her new captain and crew.

Patrick Stewart is Captain Jean-Luc Picard and the Enterprise is setting out on her maiden voyage, allowing viewers to meet crew members as they are added to the ship’s roster. We meet the android Data (Brent Spiner), Security Chief Tasha Yar (Denise Crosby), Counsellor Deanna Troi (Marina Sirtis) and the Klingon, Worf (Michael Dorn).

This new crew is on its way to Farpoint station when they are intercepted by an omnipotent being calling itself Q (John de Lancie) who sets their mission to Farpoint as a test, one that may have humanity’s very existence hanging in the balance.

I remember when this first aired. Well kind of. I was living in Bermuda at the time, and I didn’t have a satellite dish so we only got the local stations (2 of them) in my house. My math teacher, Mr. Simpson, knew I was a huge Trek fan. He was a fan as well, so he taped them as they aired, and would pass them along to me, as long as they didn’t interfere with my schooling (and I was having a tough time with his class).

When he gave me his copy of Encounter at Farpoint, I raced home that day after school and watched it immediately. I lost count of how many times I watched it over that weekend. Then, while we were visiting a friend who had two VCRs I made a copy for myself, and watched it over and over. I know this episode backwards and forwards and can quote along with it.

It’s a fairly good introduction to the characters and the worlds they inhabit, but it’s also very obvious that they are trying to find their way, and their groove right from the beginning – and they aren’t quite there yet. It’s fun to see how the characters began, knowing how they will turn out.

The series looks amazing, and I remember being wowed by the new ship, the uniforms, the consoles, the special effects – it had to walk the line of being familiar while also bringing a new life to the Trek Universe.

Guiding us in, is an updated version of The Motion Picture theme by Jerry Goldsmith, and a pretty solid introductory score by Dennis McCarthy.

Overall for a pilot episode, Encounter at Farpoint is pretty enjoyable. Of course, it’s also been intricately woven into my youth, so I have strong feelings about it. And the passing of the torch by seeing an elderly McCoy (DeForest Kelley) touring the ship is a great little moment.

Heck, I remember the early days of the Official Star Trek Fan Club in Bermuda, created by my friend Steve and we screened The Cage and Encounter at Farpoint in one of our first gatherings.

Star Trek: The Next Generation was a welcome addition to my viewing schedule, and now revisiting them for the blog, I’m looking forward to the continuing voyages of the Enterprise. 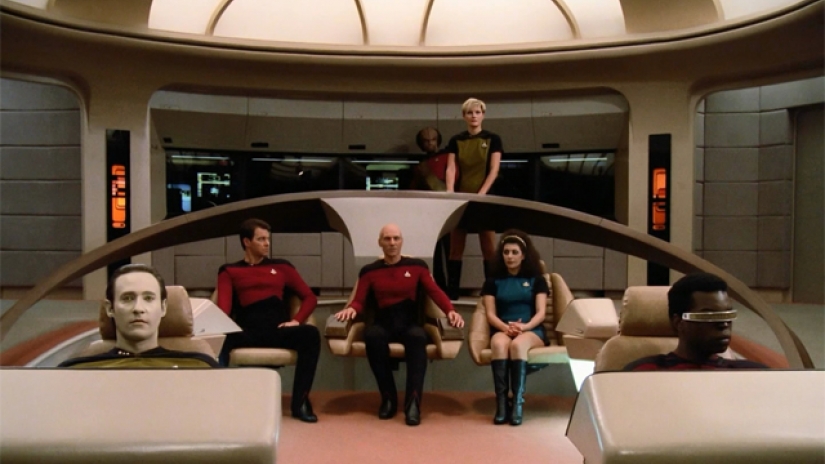