Brian De Palma directs from a David Mamet script which helped win Sean Connery an Oscar for Best Supporting Actor. The Untouchables starring Kevin Costner and Robert De Niro is the next stop in What Else to Watch following my screening of Battleship Potemkin in The Movie Book from DK Canada.

This was my first exposure to De Palma, and I was wowed by it. I love his camera work, the way he tells his story, and features a great cast. Joining Connery, Costner and DeNiro are Andy Garcia, Charles Martin Smith, Patricia Clarkson and Billy Drago.

Costner is Treasury Agent Eliot Ness who, in a time of Prohibition, takes on Al Capone (DeNiro) in the corrupt town of Chicago. With a specially selected team at his side, including Irish beat cop, Jim Malone (Connery), agency accountant Oscar Wallace (Smith) and new recruit George Stone (Garcia), Ness is determined to take down Capone and stop is bootlegging.

Settling in and watching this film for the first time in over a decade, I was stunned at not only how well it has stood the test of time (this one still looks gorgeous) but how caught up I was in the story, the performances and the craftsmanship that went into the film’s creation.

Having recently seen Battleship Potemkin, I quite like the homage De Palma makes to the film with his stairs sequence in the train station – wonderfully choreographed and executed.

Connery is still fantastic, and Ennio Morricone’s score is still brilliant – I still hum and whistle it more than I realise. The story is wonderfully balanced between Ness’ home life and his work, as well as Capone’s actions and reactions.

I love how this one is put together, the camerawork and cinematography are fantastic. It like, Carrie before it, seems to have come along at the right moment, and was a perfect storm of film-making and creative forces.

I really love how De Palma has crafted his film. There’s tension, a really well-crafted tale, only based loosely on the actual Ness investigation. Connery, who has turned in countless performances, and a number of them noteworthy, finally took home an overdue Oscar, and it couldn’t have been for a better role.

In fact, one could make an argument that every cast member is at the top of their game in this film.

And, I have to say it, I love the costumes. I’m a sucker for a fedora (none of this trilby nonsense) and each one of their characters has their own distinctive style that helps bring it all to life.

After all this time, the film remains captivating, engaging, looks gorgeous, and plays brilliantly.

The Movie Book from DK Canada continues to hit it out of the park. Pick one up, and pick a movie tonight! 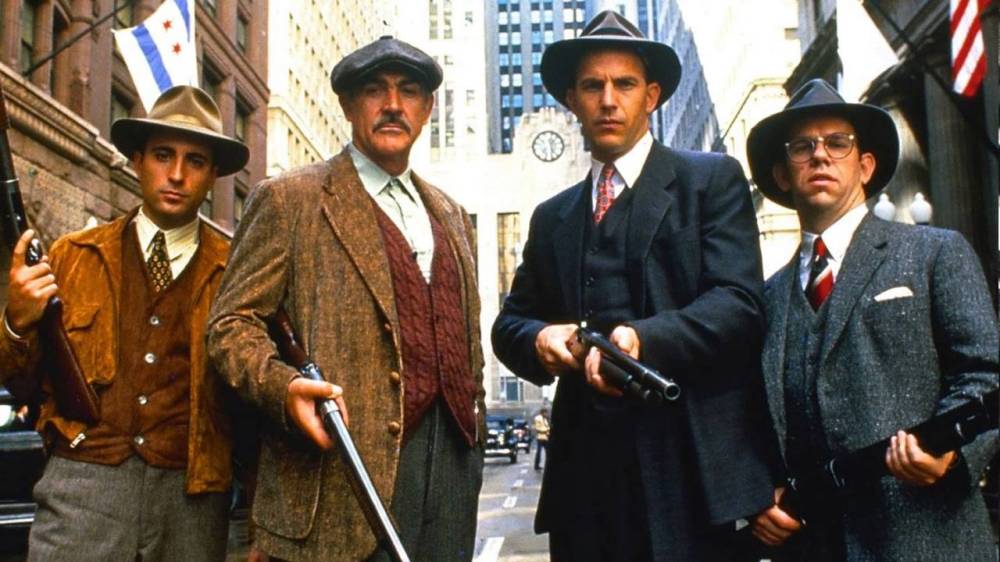