The Movie Book from DK Books invites me to dive into the first What Else to Watch list tying in a number of films in a similar vein to Melies iconic A Trip to the Moon.

A Trip to Mars seems to be a bit of a response by the Americans, led by Thomas Edison and his team of creators. That being said, it lacks the style, stage-like design and joie de vivre that Melies films convey so beautifully.

Clocking in at a brisk five minutes the story follows a scientist who perfects reverse gravity. Apparently it’s done by combining two potions atop whatever you wish to be levitated. After a couple of tests, the scientist douses himself and moments later finds himself floating out the window and skyward.

Where Melies’ films embraced the would-be technology that would be used to perform the journey, as well as the trip itself,  imbuing them with a wondrous magic, this film rushes everything. We race through space, tumbing upward with our hero scientist, until moments later he falls up to the surface of Mars.

Here he encounters a few strange beings, none of them given enough screentime, including a strange forest, and a rather pointy-eared giant who provides the scientist with a way home. 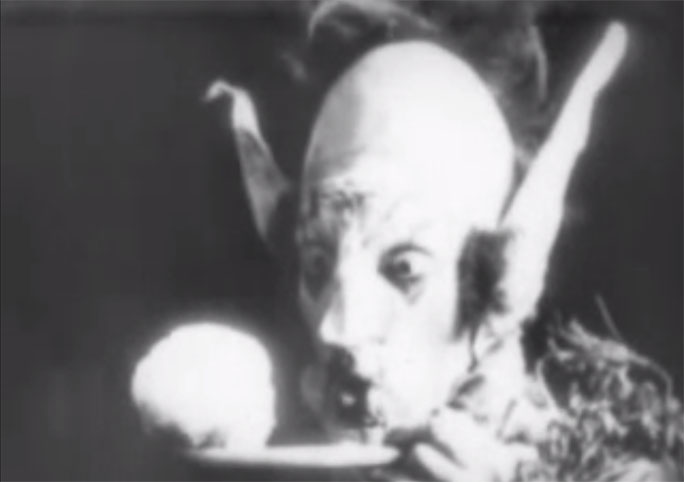 It lacks the magic of Melies’ films, and comes across as a barebones exercise of basic special effects, which at the time, may have wowed a viewer or two, but it lacks the pull and entertainment value of the beautiful French films that no doubt influenced it.

Perhaps that is in part due to Edison, himself. He was never a showman the way Georges Melies was, and consequently, I’m sure anyone who worked for him, like the director, had his creativity smothered and controlled.

It’s funny, because when I was a child, I remember doing a report on Edison, and presenting it in class. I was probably around nine or ten and it was about all the things he created.

It wasn’t until much later that I learned he merely took credit for all those people working for him. He may have had a mechanical creativity, but lacked an imaginative one.

Let’s see what comes up next in DK Book’s The Movie Book. Grab the popcorn, willya?