Using Jules Verne’s Voyages Extraordinaires series as its inspiration, the next stop in DK Books’ The Movie Book is the highly enjoyable The Conquest of the Pole from the brilliant French showman, Georges Melies.

The film follows a muktin-national team of explorers, occasionally interferered with by a group of Suffragettes who are planning on exploring the Arctic and discovering the North Pole (in the form of a giant rotating needle).

Using his unique flair for set deigns (the vehicle cross sections are some of my favorite things in all his films and you can see how they influence filmmakers like Wes Anderson), and stage-like presentation Melies tells a fun, often comic tale, that still entertains.

Much like his previous films, this one follows a very predictable pattern; the discussion and presentatiin of ideas to the team, a glance inside the workshop, the journey, an all too brief excursion at the film’s subject destination, usually with a strange encounter, followed by the successful return home.

Depending on the cut you are watching this short can run thirty to forty odd minutes, and it’s worth it just for the brief encounter with a snow giant, and the Arctic animals delighting in the explorers’ departure. 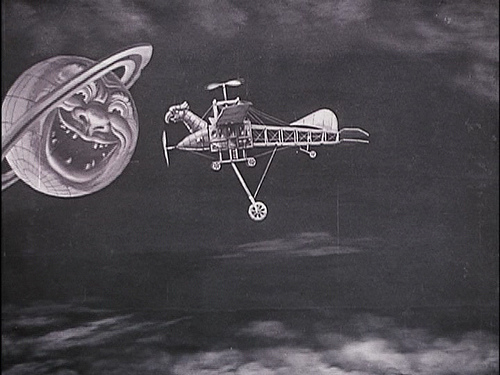 It’s a lot of fun, and the encounter at the Pole, with the man-eating snow(!), is pretty fun, and fairly well realised. Sadly the Suffragetes come off as a little too comical in wanting to be involved with the Arctic exploration, but that may be a refelection of the time.

The multi-national team fare a bit better than the female characters, tbe French being the most appealing, of course. The rest, including representatives from the States, Japan and China, are a bit like stereotypes, but not aggresively so. The performances have to be larger than life in silent films, a pantomime in effect.

My time with Melies, just exploring these three films has been a wonderful introduction to film all over again. I delight in his wonderful style of filmmaking, as he told the founding stories in almost every genre of film that have grown into movies that have swept up and entertained the world.

Happily, you can find a few of Melies’ films on YouTube and I can’t recommend taking a look at them strongly enough, and if you find you enjoy them, stick with me as I hit the What Else to Watch list for his film A Trip to the Moon as I delve deeper into the DK Books’ The Movie Book.

Check it out yourself, and find something to watch tonight!