The Doctor (Tennant) and Rose (Billie Piper) go back to school, and the Companion gets a look at a possible future in School Reunion. Airing on 29 April, 2006 the episode was written by Toby Whithouse, and it brought back a couple of fan favourites.

When strange happenings occur at Deffry Vale High School the Time Lord and his companion investigate, and uncover an alien conspiracy. The Krillitanes, a species that take the best of the species they conquer. Now they have come to Earth and are using the minds of children as a massive computer to crack the “god-maker” which will give them ultimate power.

Led by Mr. Finch (Anthony Stewart Head), they represent a valid threat not only to the planet, but the Doctor as well.

Helping them out is Mickey (Noel Clarke), but things get really interesting when previous Companions, Sarah-Jane Smith (Elisabeth Sladen) and robotic dog, K9 are discovered conducting an investigation of their own.

Here is where the episode truly shines, Rose sees in Sarah-Jane a possible future for herself, longtime fans get a great payoff, and the story provides a poignant commentary on life and change.

Yes, it’s another fun adventure, but the undercurrent of loss, friendship, love and hope made this one a real winner for me. Well that, and Mickey realising he is and then refusing to be, the tin dog.

I like this episode quite a bit and was so delighted to see Sarah-Jane come back, and it is handled so wonderfully. It also helped launch The Sarah-Jane Adventures.

The Girl in the Fireplace is classic Steven Moffat. Airing on 6 May, 2006 we get a story that plays with time, features an interesting villain in the clockwork killers and a nice little love story as well.

The Dotor, Rose and Mickey find themselves on a spacechip that seems to be lacking any crew in the 51st century, and in the midst of the strange technology is a fireplace connecting it to 18th century Versailles. The Doctor travels through it and encounters a young girl, and then when he meets her again she’s aged, and reveals herself to be Madame de Pompadour (Sophia Myles).

It seems she is being stalked across time by the clockwork robots from the marooned starship. The Doctor has to figure out why, save her, and maybe fall in love with her a bit.

This is Moffat at his best. It’s a wonderfully crafted story that hits all the emotional buttons, tells a great Doctor Who story. Now while it may be argued that the Doctor doesn’t fall in love, that he’s not that type of character, we see, pretty quickly, that this version of him is.

There are so many great moments in this episode, including the Doctor acting drunk, the telepathic connection that he and Madame de Pompadour share… so many…

One also has to take into account today’s viewing audience and fans, it’s a different world out there, and while the Doctor has endured, he does have to change. That’s what regenerations are all about…

Next time the Cybermen return!!! 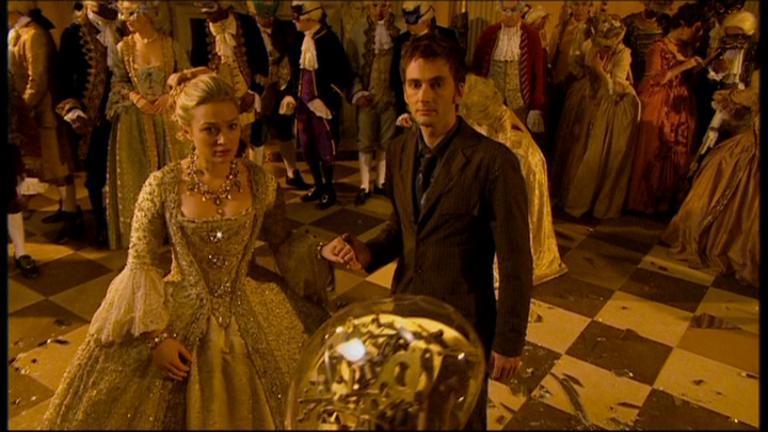