Things get underway pretty quick for Clark (Tim Daly) this week, as the Toyman (Bud Cort) makes his first appearance in Fun and Games. This episode aired 7 September 1996.

A gang leader, Bruno Manheim (Bruce Weitz) finds himself the target of the Toyman, the subject of an act of revenge. Lois (Dana Delaney) and Jimmy (David Kaufman) are tracking down the story, while Clark rounds up some baddies who had a run in with the new villain.

Bruno’s cultivated image won’t save him from the attacks, and Clark finds himself saving the mob boss a few times, while trying to put a stop to the Toyman’s reign of terror.

Superman will, of course, save the day. Bruno may not necessarily learn his lesson,and nor have we seen the last of the Toyman, but the episode continues to set up the world nicely.

The story tends to be fast paced, bright and colourful, and of course that big smiling face on the Toyman’s mask is pretty unnerving. I also enjoy the fact that the showrunners continue to make sure that while Superman is incredibly strong, some things do take a bit of effort for him, and he can be left winded, or get knocked down. He’s not invincible. 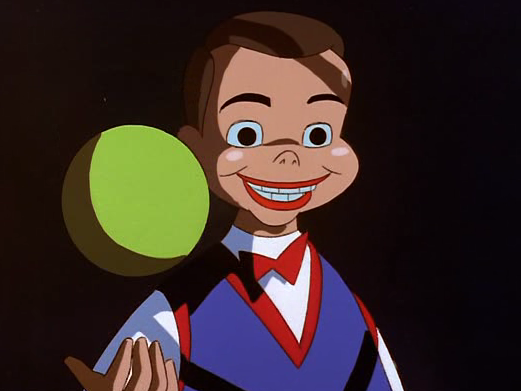 A Little Piece of Home shows just how mortal Superman can be. Airing on 14 September, 1996, Lex Luthor (Clancy Brown) learns of the existence of kryptonite and the damaging effect it can have on Metropolis’ protecting angel.

The episode introduces Luthor’s loyal aide, Mercy Graves (Lisa Edelstein), and shows how well the two work together, as they realise just how dangerous the meteorite is to Superman. Not to mention how tough she is.

Luthor reaches out to a criminal, Joey (Thomas F. Wilson), to pull a bit of a heist, to trap Superman, and expose him to kryptonite. Meanwhile Lois is working on the story thanks to an insider at LexCorp.

This incarnation is very much a match for Superman, where Clark may have the strength and superpowers, Luthor is smart, devious, and incredibly cunning.

I loved that Tress MacNeille a very recognisable voice actor, especially for Futurama, makes a couple of appearances in this episode, and that another staple of the DC universe, S.T.A.R. Labs makes an appearance, as does Bibbo (Brad Garrett).

The episode ends with Lois and Superman confronting a robotic T-Rex controlled by Lex, and who doesn’t want to see something like that? The series is establishing a great sense of fun, while being faithful to its source material.

The last episode this week introduces us to the Parasite (Brion James!) in Feeding Time. This episode aired 21 September, 1996, and not only featured James but also Robert Patrick and Lauren Tom (Futurama’s Amy).

Rudy Jones is just a janitor, until he’s transformed into the Parasite, a being that can sap and copy peoples memories, energy and powers… even Superman’s!

There is some nice continuity from the previous episode as Superman works with Professor Emile Hamilton (Victor Brandt) at S.T.A.R. Labs working on suits and tech to protect Clark from the effects of kryptonite.

Patrick is a thug named LeBeau who causes an accident at the labs where he’s trying to jack some material with Rudy’s help and that incident creates the Parasite.

At at touch, the Parasite can absorb the energy of another being, but it’s temporary. Realising that, the villain goes looking for Clark to absorb more power. Hopefully, Superman can come up with a way to vanquish the Parasite without being touched.

And how will he keep his secret identity safe now that the Parasite knows who he is?

An enjoyable episode, that continues to set up and create Superman’s animated universe rather nicely.

Until next time, up… up… and away!