This week in the TARDIS, we say goodbye to a Companion, and an old enemy returns. Resurrection of the Daleks, written by Eric Saward, this story was broken into two 45 minute episodes that ran from 8 to the 15 February, 1984.

It seems someone (thing?) has been working for a long time to free Davros (Terry Molloy) from a prison station, with the intention of resurrecting his most fearsome creation to their former glory, the Daleks, but does the mad genius have another goal in mind for the dangerous beings? And how will the Doctor play into it?

There are some Dalek-helmeted humans working with the Daleks to free Davros, and while they assist the Daleks, the creatures attempt to make it clear that these humans are subservient to them, and may not be all that they seem to be.

Location work makes the story look a little more epic as machine gun toting bobbies go about shooting down strangely dressed people, who disappear when they are killed, the bodies materializing on an advanced ship in orbit.  The location ties in nicely with the sets used, and overall, ends up being a very good looking story.

There are some interesting beats in the story, which moves along nicely, the Doctor holding, and actually using a gun, a hunt for a Dalek lifeform through an abandoned building after it’s battle casing has been destroyed. Turlough gets captured, Teagan gets hurt, and Davros poses a threat to everyone involved. 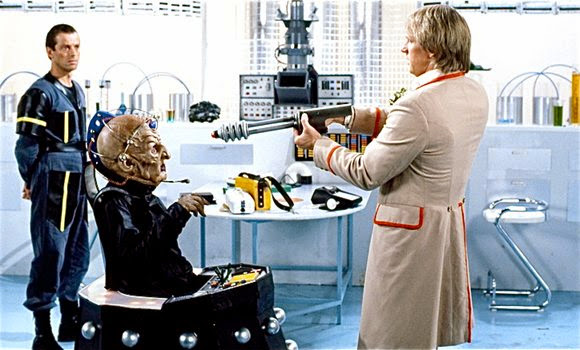 The Doctor is captured, and is going to have his mind sapped by Davros before his execution, Davros wants his knowledge, and then they plan to duplicate the Doctor to join their troops. They then plan to use the Doctor’s duplicate and travel to Gallifrey and have him assassinate the members of the High Council!

When he’s finally freed, the Doctor decides to confront Davros one last time, admitting to Teagan that he plans to kill the mad man. The Daleks turn against Davros, well, some of them, as he’s created a virus that could wipe them all out, it seems he never truly stops being evil and devious.

And it hints that all of the Daleks and Davros have been destroyed, but we know that can’t be true…

There is a lot going on in this story, there are betrayals, confrontations, and much trouble for the Time Lord and his Companions, and by story’s end, Teagan has decided to take her leave of the Doctor and the TARDIS. It seems she has had her fill of death, and the unusual travel. She’s stopped having fun with it, and elects to leave.

As expected after so many years, the model work and the set design is vastly improved, though some of Davros’ makeup job isn’t as strong as it has been in other stories. It doesn’t detract from the fact that this one is a pretty fine entry in the series.

Next time, the Doctor and Turlough find themselves on the Planet of Fire!