The Time Lord, and his Companions, Teagan (Janet Fielding) and Turlough (Mark Strickson) are forced to land the TARDIS on the remote world of Frontios, and things aren’t all they seem, as the deaths keep piling up, but not the bodies… something them is dragging them underground.

The TARDIS is having problems, doors are sealed, and can’t be opened, the Doctor believes it may be a spatial anomaly, but as he’s busy helping out the wounded in a tunnel collapse, he is instead focused on that problem first.

There are politics and control issues at work on the planet, as the survivors of a crashed ship in uniforms that seem vaguely Imperial, are the ones being hunted and hurt. The crew, and their commanders believe they are under attack. In fact it was one of those attacks that brought the TARDIS down, but there is more going on and the Doctor and his lot find themselves stuck right in the middle, as usual.

As dissent and trouble grows among the stranded crew and the time travelers, the Doctor discovers the underground threat, a race of beings known as Tractators. These aliens are very large, goofy looking things, a bit like bipedal snails, maybe? The Doctor has to find out what they want, and what they are doing underground. Turlough is in a state of shock, because it seems his home planet had been invaded by the Tractators, a millennium ago and they tried to wipe out most of his home.

There are some very cool things in this story. First up, the TARDIS is seemingly destroyed, with only the hat stand left, and the Doctor finally dons some glasses, something that begins to recur through his future regenerations.

I do think that it takes way too long to introduce the Tractators in this story, and that there could have been a lot of chaff culled from the first two parts of the story, to move it along a little quicker.

In fact, for me, this is probably one of the duller tales, and except for the Doctor’s glasses, the occasional remark, and the reveal of Turlough’s past, I didn’t find much to engage or entertain me. It doesn’t move as fast as previous tales, and feels like a bit of a step back.

It does, however, set up next week’s story, as the happily repaired TARDIS leaves Frontios is pulled into some form of time corridor, that will lead them to the center of the universe where they will encounter the Resurrection of the Daleks! 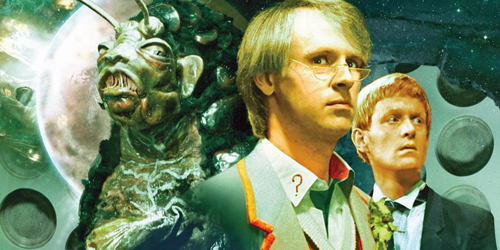