I love stagecraft, and I love seeing a well-produced, perfectly acted and paced stage production.

Drayton’s 2016 season has all of that and more, and playing on the main stage currently at the Huron County Playhouse in gorgeous Grand Bend (though to be honest I feel like I’m on Amity Island from Jaws) is the nothing short of fabulous, and even that appellation isn’t strong enough to describe how wonderful the show is, Sister Act.

Based loosely on the Whoopi Goldberg film, the show features music by the renowned Alan Menken, lyrics by Glenn Slater, and book by Cheri and Bill Steinkellner. Sister Act is under the sure directorial hand of Max Reimer, with wonderful choreography by Lisa Stevens, and musical direction by Paul De Gurse.

Set in the late 70s, the production perfectly marries divine spirit and funky soul as we follow Deloris Van Cartier, a would-be night club performer, played delightfully, and buoyantly by the lovely Aurianna Angelique, who alongside Susan Gilmour’s humorous and poignant Mother Superior, carries the lion share of the production.

And both actors do so easily, Angelique brings Deloris to life, making the character very much her own, Gilmour slides into the habit easily, and conveys matronly approval, and disapproval as required.

Deloris needs hiding from Curtis (Lee Siegel) who is hunting her down for witnessing a murder. An old high school friend, and cop, Eddie (Matthew G. Brown – who adds some wonderful layers, both figuratively and emotionally to his role) spirits her away into hiding, and what better place to keep her safe, than a convent?

Deloris shakes things up with her vibrant way of doing things, and soon finds herself inspiring her new sisters to Raise Your Voice and Spread the Love Around.

But when Curtis comes looking for her, will her new family protect her, will Eddie win her heart, and will she realize where she truly belongs?

Featuring some of the best set and lighting design I’ve seen in a stage show in recent times, the show is constantly moving and has so much going on. A number of the actors pull double duty but with Rachel Berchtold’s 70s costume design, you don’t notice. That and the actor’s performances, of course.

There are countless scene-stealing moments; Larry Mannell’s too short turn as Monsignor O’Hara is perfect and plays to the audience wonderfully, and leaves them wanting more; the trio of baddies played by Oscar Moreno, David Lopez, and Gerrad Everard have a fantastic number together, as well as some great comedic beats. And though I may be personally biased, Amanda Leigh’s turn as the slightly out-of-touch Sister Mary Martin-of-Tours, is a lot of fun to watch, and I love that she gets a great moment at the end of the show!

The cast is exciting and engaging, with countless names to watch out for, Sarah Horsman, Susan Johnston Collins, Rebecca Poff (who gets a nice bit of Rapper’s Delight), and Laura Mae Nason (who renders a wonderful turn as Sister Mary Robert who begins to question her ilfe’s choices) , and it’s a show that is bound to entertain anyone who gets out to Grand Bend to see it before the 25th of the month. Believe me, it’s worth the trip up!

If you miss it there, it also shows up in Cambridge, running from November 23 to December 24.

And best of all, no matter where you see it, or any of the Drayton shows, tickets are affordable, and there isn’t a bad seat in the house.

Get out there, see it! It’s a blessing! 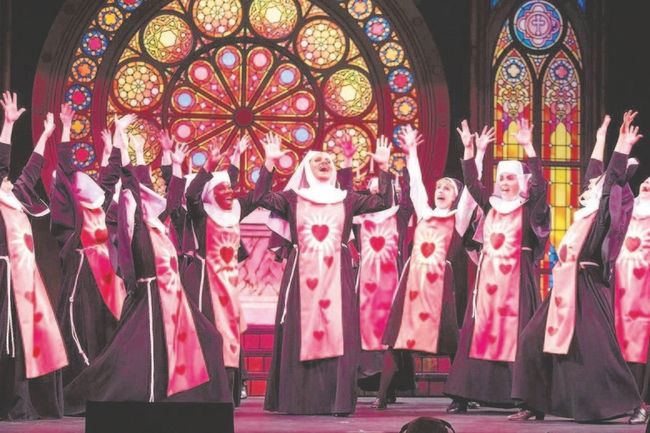