More new canon for Star Wars via this young adult book that collects six tales from creatures that inhabit that galaxy far, far away, and were seen or hinted at in The Force Awakens. Penned by Landry Q. Walker with some nice art by Tyler Scarlet the stories are all exciting, fun, and have a real sense of the Star Wars universe, and expands nicely on some of the new beings who inhabit it.

Three of the tales take place on Jakku. We check in with Constable Zuvio at Nima outpost as he hunts down a robotic thief in High Noon on Jakku. Unkar Plutt finds intrigue, and romance (?) in True Love, and Bobbajo shares a fascinating and humorous story that intersects with events of A New Hope in All Creatures Great and Small.

Then we hop across the galaxy to Takodana to Maz Kanata’s castle for two intriguing tales, the first centers on Maz’s chef, Strono ‘Cookie’ Tuggs, investigating the murder of his sous chef, and organizing a devious way to out the killer. Meanwhile in orbit, a betrayal leads a criminal to seek out sanctuary at Maz’s castle and hopes for a change of face, literally, under the creative surgery of the Frigosians, Laparo and Thromba.

And finally, we join Captain Sidon Ithano in the very enjoyable tale, The Crimson Corsair and the Lost Treasure of Count Dooku. Ithano is a great character, saying next to nothing through the entire tale, and just comes across as very cool as the Star Wars universe gives us a fun take on a swashbuckling pirate adventure. 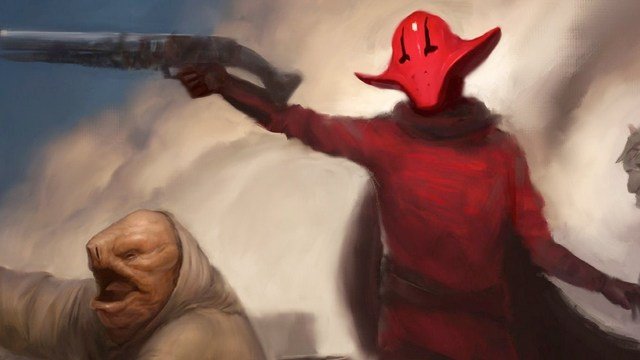 The Crimson Corsair was probably my favorite of the tales, it just had such a sense of fun about it, but All Creatures Great and Small isn’t too far behind. It’s funny, gives a new view (maybe) of some of the things in A New Hope, and has some very funny moments, but to be clear, Bobbajo is nowhere near as cool as Captain Ithano.

None of these characters were highlighted in The Force Awakens, (except Unkar) they were mostly relegated to the background, but there is no a nice background for these fellows that helps fill out the galaxy a little more.

Landry tells a good tale, and I’d love to see him tell a more, maybe with some of the major characters, but I won’t lie, I’d love to see more stories around the Crimson Corsair.

This one is a quick, fun read, the six stories aren’t overly long, the longest being about eighty pages, but the book is a smaller size, so each one flies by. In fact, younger readers, much like this reader, will probably be clamoring for more.