It’s back to the Apes saga as I dive into the most recent sequel as I continue my way through the Sci-Fi Chronicles.

Set a decade or two after the previous film, Rise of the Planet of the Apes, and Caesar (mo-capped by Andy Serkis) is leading a growing nation of evolved apes. But there are still humans out there, struggling to survive, but no events may lead to another and possibly final clash between man and ape as the battle for the planet continues.

Gary Oldman join Serkis, as well as Jason Clarke and Keri Russell as we delve into the increasingly developed culture, and community of these advanced apes, they are making the world their own, but our story is situated in North America, where we see then hunting together, riding horses, and sharing their lives and stories with one another.

Unfortunately for the human characters, who are stumbled upon by Caesar’s son (Nick Thurston) the apes are situated near a power station and dam that Dreyfus (Oldman), Malcolm (Clarke) and his group want to activate so that they can live in relative comfort in the nearby deserted remains of San Francisco.

Caesar and Koba (Toby Kebbell) are the only apes that can speak, and it’s shocking to hear it, each and every time, because the visual effects are so good at this point, that the apes look pretty photo-real, and it’s unnerving to hear a voice come from it.

The humans try to come to a truce of forms with the apes, but tensions are high between the two groups and we, humans, may just be on the losing side… which isn’t really much of a spoiler, I mean, it’s right there in the title.

There is commentary here, large action moments, and tons of drama, all of it wonderfully paced and acted, making this film a worthy entry into the Apes series. There are heroes and villains on both sides of the conflict, and no one is either all good or all bad, there is a lot of grey in this film and I like that.

It also looks amazing, with almost all of it being shot outside on locations, the green forests are a perfect backdrop, Mother Nature serves as an impassive observer to the war that seems inevitable, no matter what those who strive for peace may do.

I love that the CG and visual effects in this film aren’t here to dominate and overhsadow the film, they are here to advance the story, and they do. While still in the vein of the original films, the effects are leaps and bounds ahead, and will allow the filmmakers to better explore the developing Ape culture, and the human element (if any remains) in any future films.

Solid entertainment, and a strong addition to the series. These were great to revisit. 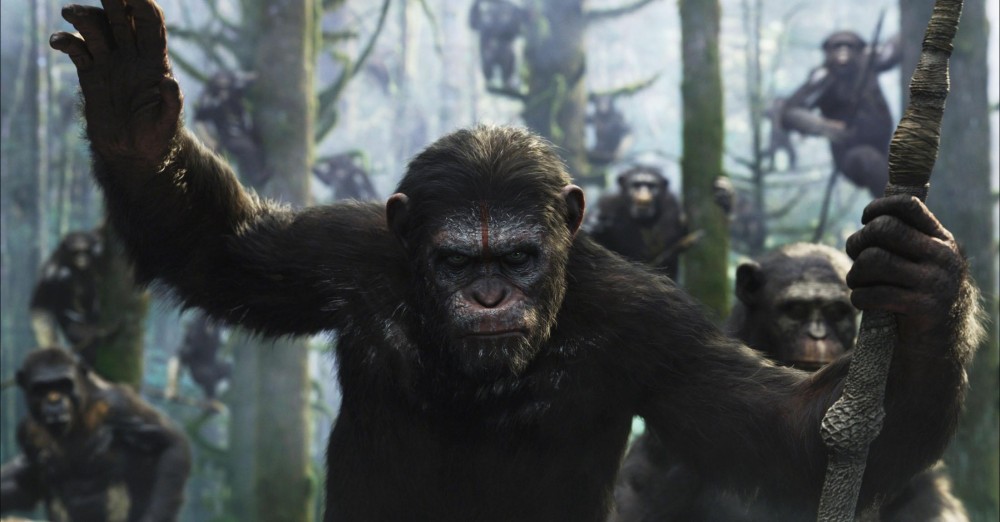