Thomas (Tom Selleck) finds himself on the forbidden island of Kapu in the first episode ip this week. It was written by Deborah Dean Davis, and had an original airdate of 26 November, 1986.

While attempting to serve some papers, Thomas comes to the aid of a young Hawaiian woman, Alealea (Deborah Calbero), saving her from the hitman, but getting injured himself, in the escape.

He awakes to find himself on a small island, where the traditions of Hawaii are kept, and outsiders are unwelcome. Despite that, they don’t seem to be willing to let the investigator leave, and they also deny the existence of Alealea.

Rick (Larry Manetti), T.C. (Roger E. Mosley) and Higgins (John Hillerman) are initially undisturbed by the fact that they haven’t seen Magnum in a few days; Rick is under the impression that there is a woman involved. But when he starts to suspect something has happened to his friend, Ice Pick (Elisha Cook Jr.) reveals that he is right. He also gives Rick some important leads to track his friend down.

But he’s not the only one looking for Thomas. The killer, a professional, is trying to hunt the pair down as well.

This one ends up being a fairly basic episode, and not necessarily the strongest of the season. The hunt for Thomas could have been more tightly paced, and the story could have played up the beauty of the culture and traditions the islanders were trying to protect, while also insinuating that they were doing something darker to keep Thomas there.

Solid, but not the best. 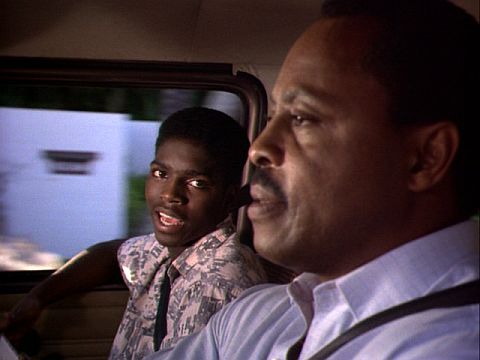 Missing Melody was written by Roger E. Mosley and Cal Wilson. This one originally aired on 3 December, 1986.

The story gives us a bit more of a look at T.C., when his previously unrevealed daughter, Melody (Martina Stringer), son, Bryant (Shavar Ross) and ex-wife Tina (Fay Hauser) (she gets there later) arrive on the island for holiday.

Unfortunately, Melody is kidnapped on her arrival, and T.C. is willing to do anything to get the money for the ransom, even sell his chopper. Thomas, of course, lends a hand, and begins to think that Melody and T.C. were targeted for a reason.

Everyone lends a hand in trying to help T.C., Magnum hits the streets, Rick goes to Ice Pick, and Higgins tries to transfer money out of Robin’s bank account for the ransom.

As the friends try to figure out how to get ahead of the kidnappers, as well as who they are, T.C.’s relationships with his family, and those closest to him is examined. While not everything is gone into depth, we do get a fairly reliable look at who T.C. is now, and who he was when he came back from the war.

The only downside to this is with no buildup or hints earlier in the series that any of these characters existed, there isn’t quite as strong an emotional punch as there could have been to the episode.

Until next time, aloha!