Four great directors give their own interpretations of four classic stories from Rod Serling’s fantastic television series in this big screen adaptation that is the next stop on the Sci-Fi Chronicles.

Sure there is that shadow cast over the film with the death of Vic Morrow and two child actors in a helicopter crash, but the film is fun and enjoyable, paying homage to the classic series, with some wonderful updates.

Landis directs the very fun prologue featuring Albert Brooks and Dan Akroyd, Burgess Meredith, an alumnus of the series and one of its classic episodes, All the Time in the World, serves as the narrator.

The first segment, stars Morrow as Bill, an angry, sexist, racist modern-day American who gets a taste of his own when he crosses over into the Zone. He deserves everything he gets, when his comeuppance arrives and he finds himself hunted as a Jew in Nazi, Germany, an African American in the hands of the Klu Klux Klan, and a Vietnamese soldier chased by American soldiers.

It doesn’t feel quite as expansive as it should, though the story still resonates, and some of the support cast in this story, aren’t up to snuff, but it still remains a classic tale for a reason. 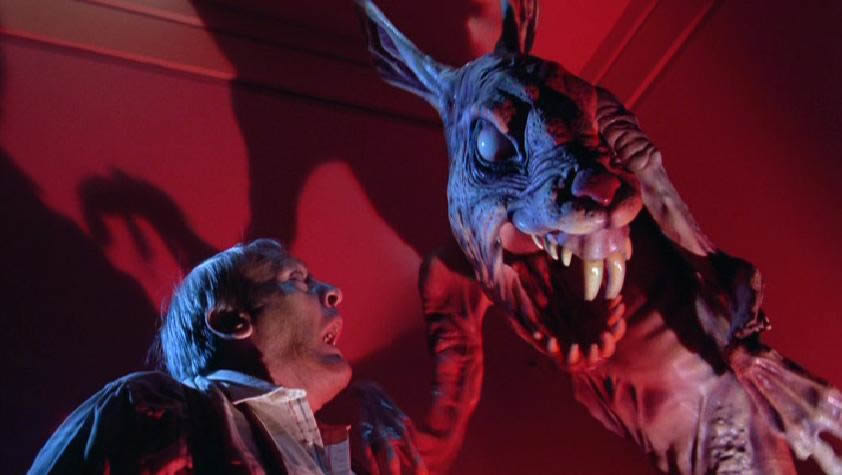 Spielberg puts Scatman Crothers through his paces as Mr. Bloom in the second segment. The story, very Spielbergian in narrative, sees Bloom arriving at an old folks home, and restoring some of its residents to their forgotten youth with a magical game of kick the can.  The moral of this story is not subtle at all, but it’s still a fun episode to watch, as the folks become young at heart (and body) and they embrace their vitality and hope.

Joe Dante takes on an appropriately dark cartoon-like (and filled) story, when Helen Foley (Kathleen Quinlan) is forced to look after a young boy, Anthony (Jeremy Licht) who has a unique power and keeps his family and town under his control. Dante staples, Kevin McCarthy and Dick Miller make appearances as well as Bill Mumy  who was the star of the original episode that featured this tale. I love the look of this segment, the way the cartoons subtly influencing the house’s structure, design, and lighting, and the way the characters all interact, trying to make sure Anthony is happy all the time.

The anthology’s final segment, directed by George Miller, is an updated take on a classic William Shatner episode. This time around, John Lithgow, playing John Valentine, is a bit of a nervous flyer, much to the consternation of his fellow passengers and flight crew, things get worse for him when he thinks he sees something on the plane’s wing.

Each of the stories is enjoyable, and you can see each of the director’s personal style in them, but the movie, overall, feels very low budget, and more akin to a television movie as opposed to a theatrical release. Despite that, it’s still a fun trip…. into the Twilight Zone.