This four-part story, which ended up being the final episode of Season 17 (as next week’s story, was never completed filming) was written by Anthony Read and ran from 22 December, 1979 to 12 January, 1980.

The crux of the plot sees the Doctor (Baker), Romana (Lalla Ward) and K9 working to repair the TARDIS (the Doctor has been working on a number of things, including the dematerialization circuits), before getting drawn into a confrontation with the creature, Nimon (voiced by Clifford Norgate), a minotaur-like alien, who has enslaved the planet Skonnos.

The planet used to be part of a succesful empire, but after civil wars, the empire has crumbled, its ships and crew falling into disrepair, all held in check, and under the rule of Nimon. The Doctor and Romana end up on of these ships, and discover its rather unusual cargo, human sacrifices for Nimon from the neighboring planet Anath, and are quickly drawn into the affairs of Nimon and the planet.

It seems the planet has made a bit of a deal with Nimon to return them to their glory days of power and conquering, and the Skonnans believe they are fullfilling the last portion of their deal, but Nimon won’t give up his control over the planet that easily, and has very devious plans of his own.

On Skonnos, Soldeed (Graham Crowden – who reminds me a wee bit of Jonathan Pryce) is troubled to learn that the cargo ship, with the Doctor and company aboard, may have disappeared, ruining their side of the bargain with Nimon. 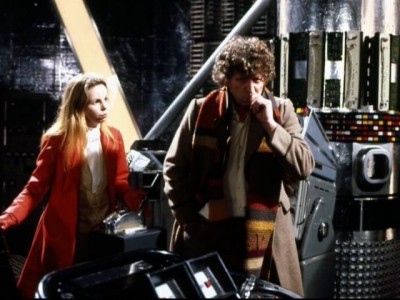 But Romana (who introduces her own sonic screwdriver – she’s made her own) gets the ship repaired and underway to Skonnos, where the Time Lady gets involved in the planet’s political affairs.  The Doctor and K9 follow, slowly, in the broken down TARDIS, (he’s even removed the time rotor) after avoiding near collisions with an asteroid, which sees a hint of his love for cricket, and may infact have an influence on his future wardrobe choice…

The sacrifices from Anath, and Romana, are passed through a portal into the realm of the Nimon, where things are very akin to the legend of Theseus and the Minotaur, as they find themselves in an ever-changing maze. The Doctor, arriving on Skonnos shortly after them, follows her in, and so begins the final confrontation with Nimon, and the final fall of the Skonnan empire.

This ends up being one of the smaller stories again, no universe hanging in the balance, and you know what, that is fine, and in fact, this one is a pretty strong entry, moving along nicely, well-paced, and the acting outweighs the simple characterization of the villains.

I rather enjoyed this one, though didn’t really care for the character design of the Nimon, nor the way in which he was performed. I was happy it didn’t delve too deeply into too much of the politics of either planet, we’re given just enough to familiarize ourselves with the concept and the characters, and then the story just rockets along.