Sometimes it pays off to wait…

Releasing this week from Anchor Bay, are the first 4 seasons (yet again) of The Walking Dead, there have been the basic editions, the collector’s editions, season sets, and now come a sweet collection with lenticular covers! The first four seasons are currently available, separately, each with their own wicked looking slip sleeve, and inside is the world of comic series creators Robert Kirkman and Tony Moore, adapted for television by Frank Darabont (and you either love him or hate him as a show runner).

I’ve only ever watched the first season. It’s not that the show didn’t interest me, it’s just that there is always so much going on!! So to be able to sit down with these gorgeously produced blu-rays, settle back on the couch, and join Sheriff Deputy Rick Grimes (Andrew Lincoln), fan favorite Daryl Dixon (Norman Reedus) as well as an incredible supporting cast, including Rick’s son, the ever-wandering off Carl (Chandler Riggs), his wife, Lori (Sarah Wayne Callies), Grimes’ former partner Shane (Jon Bernthal) and other great names like Michael Rooker, Laurie Holden and David Morrissey is a luxury I’m looking forward to indulging.

The series becomes more of a human drama, set against the backdrop of a zombie apocalypse, and brings to the fore the question of who we are as people, what makes us civilized, do our own motivations make us better or worse than the undead that stalk the survivors at every turn?

Every moment from the first four seasons is here, the drama, the terror, the zombies, and honestly, how many times can Carl really wander off?

These re-releases have all the extras found on the previous editions, so you’re not missing out on anything, there are commentaries, making of featurettes, and interviews.

I have to say, that as I dig into these seasons, I love the way they look on blu-ray, sharp picture, great sound, and of course, whether you dig on the zombie genre or not, some great characters… There are reasons the comic and now the show have been as successful as they are. They’ve tapped into something, and made household names of a number of its actors and characters.

The show has gone on to win countless awards, is now in its eighth season, and currently shows no real signs of slowing down… Not to mention there’s a wealth of source material to draw from, something I really want to dig into as well.

I was anxious over the change that affected the series when Darabont left as show runner, but now, I think I’ll be able to see how things changed, and what got better and what didn’t. That is another thing I love about binge watching!

So, as the holiday season encroaches, maybe you have a Walking Dead fan on your list, or maybe you’re looking for a good reason to pick up this landmark series, now would be the time… And let’s be honest, those lenticular covers are pretty sweet. 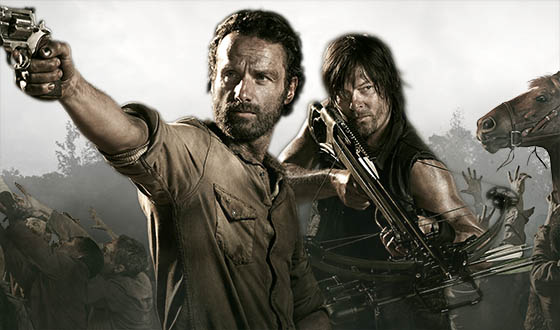 I’m loving seeing how everything will play out, to actually see some of the moments that people have talked about, to see characters that have become icons come onto the show, and to see who falls, and who lives.

All of this while asking the question – is it enough to just survive? Is that still humanity? Or are we only our true selves when we as a society, a species are thriving?

And of course there are all the typical zombie tropes, the suggestion of zombie as consumer, and conformer… I think that’s one of the things that truly appeals to the viewer about the genre. We fear that we have already become the zombie in our own lives, that we look to these characters, these survivors, and see something we recognize in ourselves, but also recognize that these characters have differentiated themselves from the masses, simply by surviving as who they are.

And perhaps through their survival, humanity, on The Walking Dead will thrive again. Personally I don’t think that’s true, I think in the end, all of the characters will die, it’s inevitable. There is truly no winning, they are fighting a losing war… And maybe it’s the morbid curiosity that also brings viewers back each week, to see humanity get whittled down a little more, and then to wonder how they, themselves, would survive the zombie apocalypse.

So with fascinating characters, dark would-be reflections of the viewers, the stories, some lifted from the comics, some for the series itself, and the fantastic creature effects, these blu-ray collections, and by extension the series, are well worth the time to settle in and enjoy.

The Walking Dead, Seasons 1 to 4, with lenticular covers, are available NOW on Blu-Ray from Anchor Bay!