It’s time for another Stephen J. Cannell series, he and Frank Lupo paired up to create this series at the behest of the head of NBC… The A-Team ran for five seasons (and I’m sure there are a number of them that I haven’t seen, though when the plots became so formulaic it may be hard to tell the difference).

The series opener, Mexican Slayride, was written by the pair and aired following Superbowl XVII. Most of the action series is there from the go, with two glaring exceptions… the van isn’t there yet, and there’s a different actor in the role of Templeton ‘Face Man’ Peck. In this, and only this episode, Face is played by Tim Dunigan, and it’s apparent from the get-go that he doesn’t work, and is replaced, starting with the next episode, with the much more suitable Dirk Benedict.

We meet reporter Amy Allen (Melinda Culea) who is desperate to find her friend, and fellow reporter, Al (William Windon), who has gone missing somewhere in Mexico. She’s even thinking of running down a rumor, in case it will help; there are reports of a crack commando unit, known as the A-Team, working in the Los Angeles underground. It seems they were sent to a military prison for a crime they claim they didn’t commit (the officer who gave them their orders regarding the assignment was killed), they escaped, and have been on the run ever since, working within the Los Angeles underground, hiring themselves out to those who need help and can pay them…

The unit is composed of Colonel John ‘Hannibal’ Smith (George Peppard), Peck, and B.A. (Bad Attitude) Baracus (Mr. T). Allen runs down a connection that may lead her to them… a veteran pilot, now held in the psychiatric wing of a V.A. hospital, Howling Mad Murdock (Dwight Schultz).

But she’s not the only one looking for them. Colonel Lynch (William Lucking), who ran the prison they escaped from, has been trying to track them down…

He finds them first, Hannibal is hard at work on the Universal Studios set of Aqua Maniac II (as the monster) and he leads Lynch on a merry chase through the studio which sets both the action and humor tone we can expect from the series. 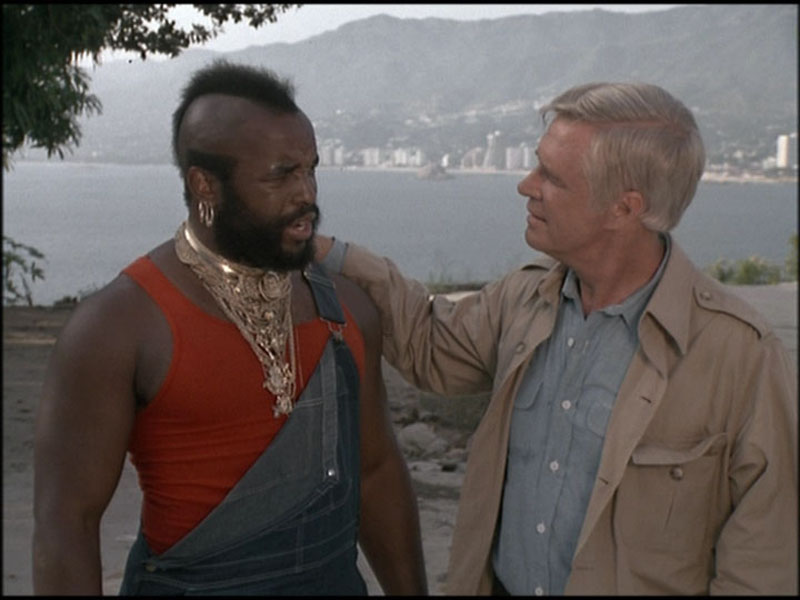 Murdock leads Amy to Hannibal, who in disguise, makes Amy jump through a couple of hoops before agreeing to be hired. From there, they have to get to Mexico, and drug B.A. who doesn’t like to fly, and especially doesn’t like to fly with Murdock.

Once there, they learn that Valdez (Sergio Calderon) is holding Al, and ruling a local village with fear, while he forces them to work his drug trade.

When Amy doesn’t have enough to pay them, they decide to con their way into the rest of the things they will need, and pretend to be a film crew shooting south of the border. They gather the things they need, but will it be enough to inspire the citizens to take their town back and drive Valdez out once and for all?

They convert a bus into a tank, and Murdock buzzes the fields with a biplane, and just like that, all the hallmarks of the series come into play including the insanely cartoon violence. There are tons of brutal crashes and people impossibly walk away from them and of course, all the gunfire, and not a single person is hurt or injured…

Should be a fun ride!