This week’s story, Planet of the Daleks, was written by Dalek creator Terry Nation, and ran for 6 episodes, from 7 April to 12 May 1973, and it picks up where last week’s episode ended. The Doctor (Pertwee) sends a warning to the Time Lords via the TARDIS’ telepathic circuits before collapsing into a coma, much to Jo’s (Katy Manning) shock and consternation.

The Doctor, recovering from his coma, races into the unknown and believes that Jo is killed in a Dalek attack, who then incapacitate the Doctor and capture him. Jo is in fact rescued by one of the locals, and sneaks into the Dalek city, hoping to rescue the Doctor, who, surprisingly, isn’t recognized by his mortal enemies this time around. This is rather fun, and a little odd, as because the Thals have a legend of a man called The Doctor who helped them against the Daleks long ago, and the Time Lord actually proves he is the same man. They also tend to have a hard time believing that Jo is from Earth, as for them, it’s nothing more than a legend. 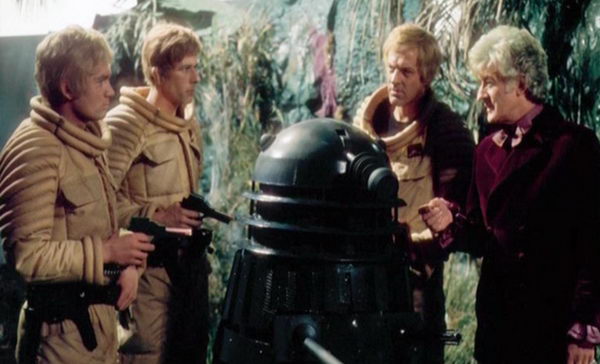 Escaping from his cell, with a Thal at his side, the Doctor escapes from the city and reunites with Jo, the rest of the Thals and some of the Spiridons, who, in addition to being studied by the Daleks, are slowly being weeded out, with the survivors serving the Daleks as slaves.

The Doctor is ready to take them all down, and with Jo and the Thals at his side he’s prepared to put a stop to the Dalek threat on Spiridon. While all this is going on, a bit of a relationship builds between Jo and one of the Thals, and while he asks her to come along with them, she declines, staying with The Doctor, but undeniably setting up the fact that Jo’s time in the TARDIS is coming to an end.

This story moves pretty quick, and there is always something going on. And while we don’t get to see as many Daleks as we learn are on the planet (upwards of 10,000), in the final showdown, when the place is being blown to pieces, we do get a glimpse of a cavern, filled with Daleks (all tiny little models) being destroyed in the onslaught.

In the end, our heroes succeed, but the Doctor cautions the Thals not to glorify the violence and battles that just happened, and urges them to live peacefully while he and Jo return to the TARDIS and prepare for their next encounter, the last adventure of the season… The Doctor encounters The Green Death.