Screening today at the Scotiabank theatre at 9:15 is this vibrant and intriguing look at the streets of Cairo, through the eyes of three young boys.

Bika, Abdullah and Sharon are young, energetic, and hardworking, driving their motorized rickshaws, tuk-tuks, through the busy back streets and throughways of the city. Definitely not old enough to drive, these three are out there everyday trying to make money to pay back loans taken to pay for the vehicle, as well as make money to help cover their family’s expenses in a very tough to get by part of the world.

Schools cost money that the families don’t have, so each of these boys works daily, risking run-ins with taxi drivers, less than friendly private cars, and even corrupt police officers who will either trash their tuk-tuk, impound it, or demand a bribe to keep from taking it. The boys just try to get by, sneaking the occasional smoke, without their parent’s knowledge, checking out the girls, and striving to make ends meet, their childhood lost in a blur of traffic.

Everything they make is for the family, they only keep the odd pound or so for themselves to get the occasional treat, and while their parents are proud that their children work so hard for the family, you can also see that they carry some undeserved shame that their kids are being forced to work, when they themselves cannot find a job in the economic and political environ that seems to keep Egyptian life in turmoil.

For the boys, politics, revolution and unsafe streets are part of daily life, in a world where everyone is just trying to get by. Each of the boys takes on the job stoically for their family, but each of them has dreams they hope to pursue, looking beyond the windshield of their little rickshaw, and desiring a better future not just for themselves but for their entire family.

A gorgeously shot documentary, the energy and excitement of the young combines with the busy streets of Cairo to craft a unique image of youth, where hope thrives, and the next fare is just around the corner.

Tuk-Tuk screens twice more during the course of the festival, both at the Scotiabank theatre – Tuesday, April 28 at 1pm, and Sunday ,May 3 at 9:00pm.

Check this one out! 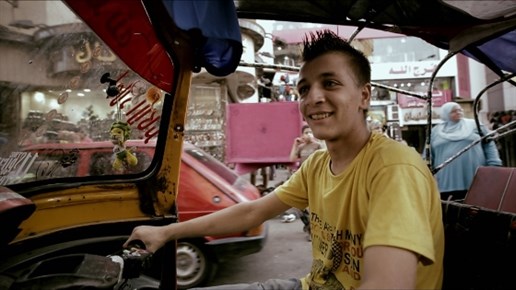