Releasing from Anchor Bay today, was this supernatural revenge thriller, that surprised me with how much I enjoyed it. I thought it would be a little enjoyable, but I found myself really getting into this one.

Zoe (the lovely Amanda Adrienne) is a deaf/mute girl on a road trip to spend some time with her boyfriend (Marc Anthony Samuel), but meets up with some trouble in one of the backwaters of America. She comes across a First Nations youth being attacked, beaten and eventually murdered before her eyes, by a bunch of local hillbillies led by Trey (Rodney Rowland) and West (Tom Ardvanay), I think they were republicans. When they grab her, and use her for their own means, read as beaten and raped repeatedly, she’s left for dead. It seems that Trey and his fellows have a historical legacy they’ve been following since their forefathers have settled in America, hunting and killing Native Americans.

A Shaman (Joseph Runningfox) discovers her and tries to save her, to bring her back from the brink of death. He doesn’t quite succeed, in fact something else, something that shares her hatred for her attackers has found its way back to the land of the living, an Apache warrior intent on revenge for his people. The Shaman tries to stop it with quite possibly the worst line ever delivered in a movie like this. He doesn’t succeed and the warrior begins to use Zoe’s body to exact his people’s vengeance. This led into the only thing that I had a real problem with in the entire film she couldn’t take revenge herself, she needed a man in possession of her body to do it. Oh well, I let that momentarily slide, and just settled into the ride that was the film. 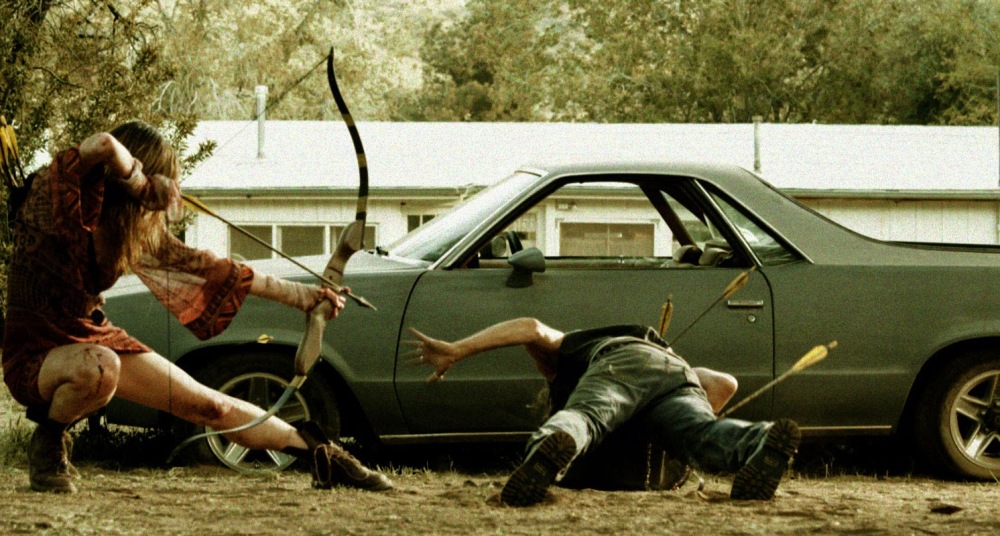 There are some nicely composed shots and still moments, all tinted with the washed out desert colours, and all the actors played it serious and straight throughout. Though I had some problems with the change in the boyfriend’s character, who shows up and is recognized by the hillbillies, from claiming Zoe could never do anything like he’s hearing about to proclaiming how she’s going to kick their asses, you could chart it up to shock and trauma, but it just didn’t ring true for me.

As Zoe begins to take her revenge, there are some brilliant and bloody kills – no spoilers but I was suitably impressed by the beats, as well as the practical effects. The bar scene is particularly awesome!

Comparisons to the neo-gothic and dark Crow series seem to be inevitable, and perhaps that was part of the reason most of the film is shot during the day to differentiate it as much as possible, and I really did enjoy watching Zoe take down each and every one of the baddies. It also has a bit of an emotional heart though, captured in a great sequence in which Zoe realizes what she now is, and what that means for her and her future.

This one ended up being pretty damned enjoyable and completely surprised me. Check it out! It’s available from Anchor Bay today!