The Daleks return in this, the first story of Jon Pertwee’s third season as the Doctor, and the ninth for the series as a whole. This four-parter was scripted by Louis Marks and ran from 1 January to 22 January, 1972. This one is a fan favorite and it’s easy to see why, there’s time travel, a spooky manor, and the Doctor’s most famous arch-enemies. Despite having changed his appearance, the Daleks recognize him, commenting on the fact that they are now aware that the Time Lord can change his appearance.

It all starts out gamely enough, the Doctor and Jo (Katy Manning) are summoned to a rather imposing manor to investigate the rumours of a ghost that has recently begun to plague Sir Reginald Styles (Wilfred Carter). He’s seen a man appear, threaten him with a weapon and then vanish. UNIT is intrigued and worried, as Styles is about to travel abroad to attend a peace conference that may help avert a third world war.

Once at the manor, they encounter a team of guerillas from the future. The Daleks have taken over the Earth in the future (the 22nd century), enslaving mankind, including those who wish to serve them. These servants are, in turn, aided by aliens, Ogrons, who look like extras from The Planet of the Apes films. These time-travelling assassins have journeyed back to this point to stop Styles, according to future history, everything begins to fall apart at this moment, as Styles is only driven by greed and power.

This doesn’t quite jibe with what the Doctor and Jo have learned of Styles, and they try to convince the guerillas both in our present and our future, as both Jo and the Doctor get a look at future Earth while eluding capture.  The Doctor begins to realize what actually may have happened and must stop a bomb from detonating, taking the manor, and Sir Reginald with it!!

This is a pretty fast-paced and enjoyable story, though there are a couple of things that made me raise my eyebrows, there is a sequence when the Doctor himself uses a gun to destroy some of the manor’s attackers! I was a bit stunned by that, the Doctor will rarely pick up a weapon, but apparently exceptions can and will be made.

I do like that continuity is maintained as much as possible through the stories, as the Doctor mentions having thought he’d destroyed the Daleks before, and that when he is being interrogated, images of his two past regenerations can be seen on the screen. The series continues to embrace and build on its own mythology, and we’re only three Doctors in!

Next time around, the Doctor confronts the Curse of Peladon! 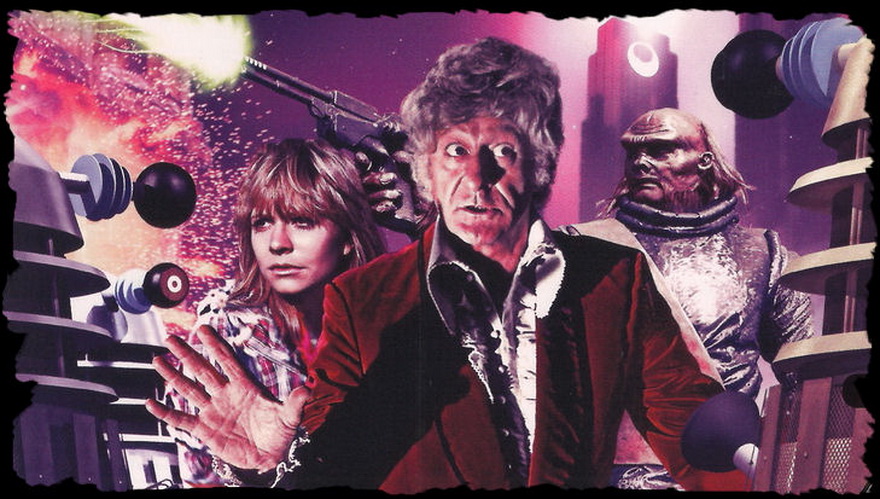