Season 7 and Jon Pertwee’s first as The Doctor comes to an end with this seven part story that was written by Don Houghton that ran from 9 May to 20 June, 1970.

It was the first story to see the Doctor slip sideways through time and space and end up on a parallel earth, probably brought on by his tinkering with the TARDIS console, still in the garage next to Bessie. There’s also a hint of a sonic screwdriver showing up soon, as he has what he calls a ‘door handler’ that automatically opens the bay doors of his garage/lab.

And, hilariously, we get our first look at Venusian karate, which the Doctor uses a couple of times through the story, and one of the sequences made me laugh aloud! (In a good way).

The Doctor is at ground zero for a drilling experiment that is planning to penetrate the earth’s crust, and reach an energy source beneath it that could solve all the energy problems of the world. Liz (Caroline John) and Brigadier Lethbridge-Stewart (Nicholas Courtney) are at his side, and are having difficulties with the lead scientist on the project, Professor Stahlman (Olaf Pooley).

There’s another problem at work as well, a dangerous green liquid is spilling from the drill, and infects anyone who touches it, reverting them to an animalistic state. Our heroes call them Primords, and they end up looking like 50s era wolfmen. The process is sped up by heat. 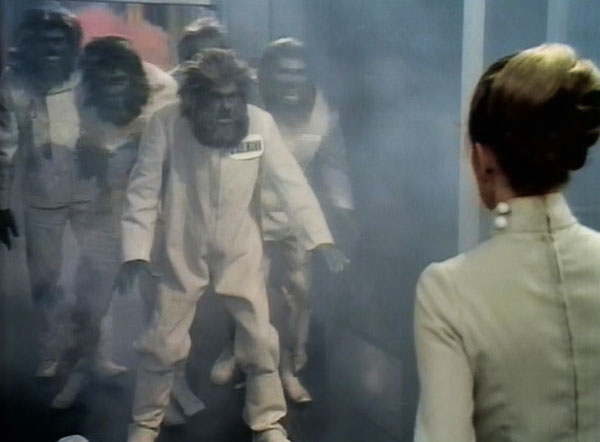 Taking a break from the break, and tinkering with the console, he slips sideways and ends up on an alternate earth, where the drilling has already progressed further along, the Primords are in full wolf-out mode, and UNIT has become a dangerous establishment, still commanded by Lethbridge-Stewart, but this one is sadistic, scarred, and wears an eye patch, at his side, is a vicious version of Liz.

The earth is beginning to super-heat, Primords are increasing, and the Doctor has to convince the alter-egos of his friends to help him get back to his own space-time, even though it may cost them their lives. And once he’s returned, he still has to find a way to stop the drilling in our reality and prevent the destruction of the planet.

It’s a pretty wild tale to wrap up the season with, and lets our regulars play their characters in all new ways, with all new looks, all while the Doctor tries to convince them of his reality.

The series successfully reinvented itself with Pertwee, and his first season was a lot of fun, I’m looking forward to see what he does in the seasons to come.

Next time, the Autons and the Nestene are back, in the season 8 opener, Terror of the Autons!!!