The Doctor (Pertwee) encounters a prehistoric terror this week, as he and UNIT plunge into this 7 episode story that was written by Malcolm Hulke and ran from 31 January to 14 March, 1970.

When UNIT and the Doctor are called in to power failures at a nuclear facility, a series of underground caves leads to a shocking discovery. A race known as the Silurians are leaving beneath the surface, and are planning to take over the surface, to claim the planet that is rightfully theirs. They are prehistoric creatures evolved into intelligent beings.

My favorite moment, apart from the Doctor working on Bessie, his automobile, is the fact that when everyone runs screaming from the Silurians, or attempts to attack or destroy them, the Doctor simply extends a hand to introduce himself and hopefully, broker a peace between the humans and the Silurians.

While Liz (Caroline John) works above in the facility, the Brigadier, Lethbridge-Stewart (Nicholas Courtney) plans a more direct assault on the beings. This move, of course, elicits disgust from the Doctor, but when he goes to warn the Silurians of the impending attack, he is captured and held prisoner. 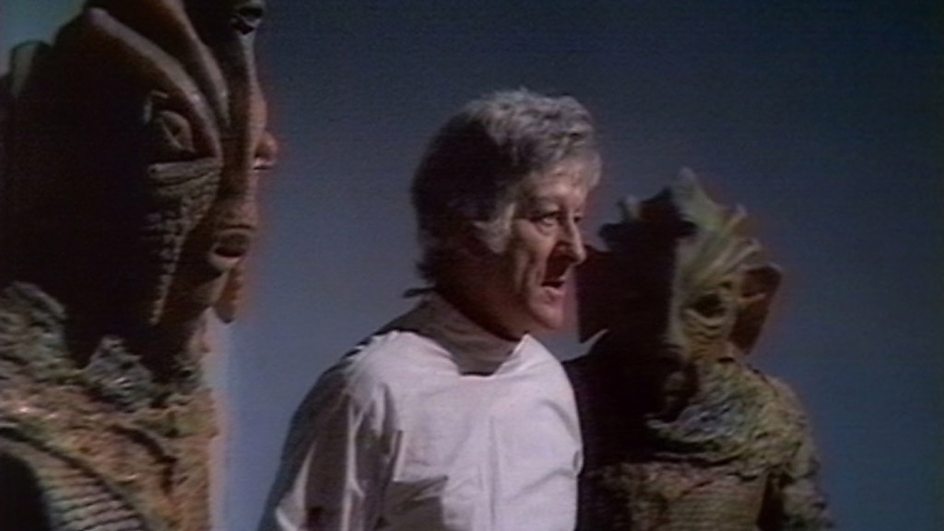 As the Doctor and UNIT combat the disease, an uneasy peace is brokered, but how long will it last, especially when the Brigadier has his orders?

I loved how this one ended, because it, hopefully, will put the Doctor and UNIT slightly at odds for the next episode. It definitely shows that neither side is completely on the same page. And while you can respect what Lethbridge-Stewart does on a human level, it definitely goes against what the Doctor believes. There have been glimmers of this before, and we know there will be plenty to come, but I certainly loved that the story ended the way it did.

Honestly, it came across as a bit of a shock when UNIT makes its move. I was just as stunned as the Doctor, because, like him, I would never see that as an answer, the Silurians were well on their way to reaching a peaceful accord with humans, and we could have done our best to share the planet, but instead fearful governments and people following the government given orders got in the way.

It definitely illustrated the difference between us and the Doctor, and of course, gives all of us something more to strive for.

I’m quite enjoying Pertwee’s turn at the moment, we’ll see what happens next time when the Doctor tangles with The Ambassadors of Death!