The journey into film noir continues with the recommendations from my Great Movies – 100 Years of Film for my screening of The Big Sleep.

Alan Ladd is Ed Beaumont, the right hand man, and best friend of corrupt politician Paul Madvig (Brian Donlevy). When Madvig shuts down a gangster, Nick Varna (Joseph Calleia) the gangster uses his clout with a local newspaper, The Observer, to cast suspicion on Madvig when his sister, Opal’s (Bonita Granville) boyfriend Taylor Henry (Richard Denning), and son to Madvig’s new political ally, Ralph Henry (Moroni Olsen) turns up murdered. Add in Veronica Lake as Janet Henry, Ralph’s daughter, who may or may not have designs on Ed, you’ve got a rather convoluted mix of suspicion and mistrust.

Almost against his well, Ed is drawn into a mystery in which he may be nothing more than a pawn, or if he can turn the game around, he can play a pawn or two himself and out the actual killer, and get his friend free of the murder charge.

Everyone in this film has a motive, has a reason, and has dark secrets that none of them want to let out. When things come to a head between Paul and Ed, Beaumont ends up in the hands of Madvig and his thugs, led by Jeff (William Bendix), and they beat him. 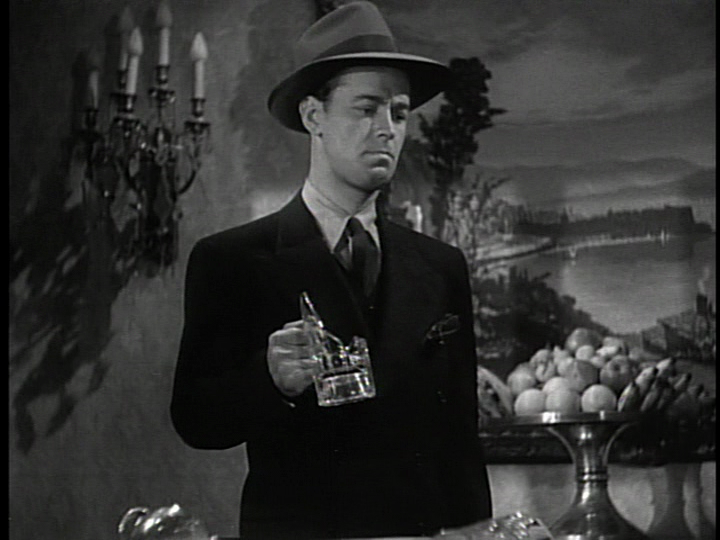 The Glass Key ends up being a wonderfully paced noir thriller with a reluctant hero in Ed, who, once drawn into events, won’t let anyone stop him from discovering who really killed Taylor, no matter where it leads.

And the trail leads him to a number of places, pitting friends against one another, and threatening to not only tear a family apart, but the possibility of sacrificing people to save oneself.

Not only had I never seen this film, I’d never heard even heard of it! And was happy to take a look at it, I mean, who doesn’t love a good noir film? And of course, there’s Veronica Lake, who I had only heard of in passing, and of course in reference to the film L.A. Confidential.

It’s a wonderfully strong film, but in my opinion, it could have been a bit longer, it doesn’t even clock in at 90 minutes. Ladd is very likeable in the role of Beaumont, and the film isn’t afraid to put the character in some extremely dangerous situations, be them of the violent or femme fatale type.

Tis series of recommendations has been one of my favorites so far, though I know there are a number more films that are coming up that will no doubt be a wonderful surprise to me.

But noir films, they may end up being my favorite genre in the long run… what are some of your favorites?