This eight part series written by Derrick Sherwin, which aired from 2 November to 21 December 1968, is an epic story that sees the return of the Cybermen (who remain unseen in the story until episode 4), the appearance of UNIT, and it’s commander, now Brigadier Lethbridge-Stewart.

The TARDIS arrives in London, after eluding an unexpected missile attack on the dark side of the moon, and the Doctor, Jamie (Frazer Hines) and Zoe (Wendy Padbury) find themselves facing off against an electronics wizard, Tobias Vaughn (Kevin Stoney) with designs not only on a corner of the market, but the world with the help of his Cybermen allies.

With UNIT helicopters (including a huge rescue) and exteriors, this story does feel incredibly epic, and for a series that has always been forced to be made on the cheap, this one looks amazing.

With the Cybermen’s mind control at work, it’s hard to tell who our heroes can trust throughout the adventure, and perhaps even parts of UNIT can be infiltrated. With all of it overseen by Vaughn, with his permanently arched eyebrow, things seem rather sinister, despite the fact that Vaughn’s right hand man, Packer (Peter Halliday) is a bit of a goof. With typical foolish human arrogance, Vaughn believes he’s the one in charge, and that he’ll be able to control the Cybermen with a machine that will induce emotions in the robotic creatures, making them easier to manage.

It’s of note, that Jamie makes some rather sexist remarks, not surprising given the time period he came from, but it’s nice that both Zoe and their new friend in this story, Isobel (Sally Faulkner) call him on it.

There’s also a familiar sight for fans who have only seen the new series, Cybermen in front of St. Paul’s… Something we just saw in Death In Heaven, the finale of Capaldi’s first season as the Doctor.

Of course, as the story races to its conclusion, Vaughn, power-hungry though he is, realizes that the Cybermen betrayed him, and have no intention of honoring any deals with him, so he and the Doctor form a tenuous alliance. Tenuous, because through it all, Vaughn’s nature seems always to threaten everything, including the safety of the planet, despite the fact that he and the Doctor seem to be the only thing between the Cybermen and the complete destruction of Earth.

There are a great moments, throughout this, including the Doctor’s leaping and shooting about as the Cybermen start shooting at him, in one brief action and cry, his version of the Doctor is completely summed up, puckish, a little cowardly, and a lot of fun.

In the end, as things seem most dire, with a Cyberbomb descending on Earth, UNIT saves the day, with the aid of a Russian missile taking out the Cyber mothership. Our trio bundle their way into the TARDIS, and prepare for their next adventure with… The Krotons. 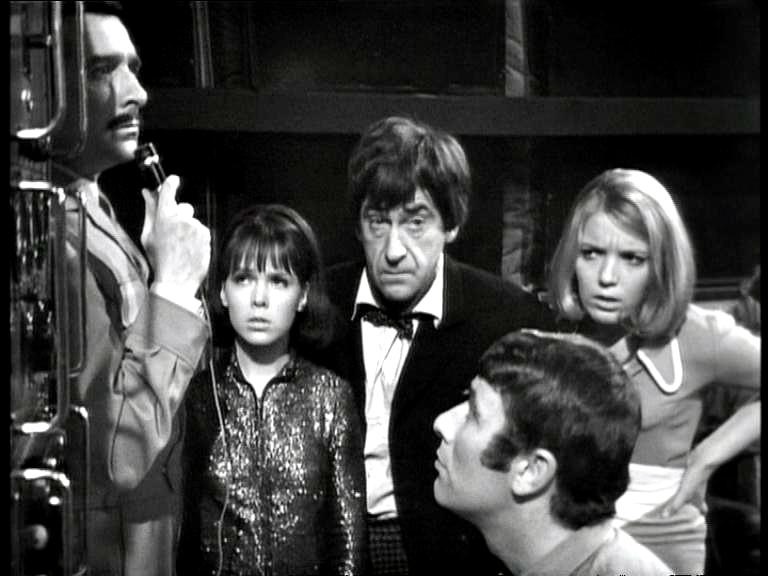