This week’s investigations starts with Forced Retirement. This episode was written by William R. Stratton and aired 9 December, 1977. The phone message this time is an automated call asking if he’s interested in having something sold by computer calls.

Beth (Gretchen Corbett) asks for Jim’s help on a case, after someone breaks into her apartment, that ends up dealing with corporate corruption. Dealing with a company that’s interested in developing a submarine device, Jim (James Garner) poses us an investor as he tries to suss out who’s corrupt, who’s not, and what’s really going on.

Standing in his way his a scheming businessman, who is using the company, and its developments as a cover, and who better to play Richard Lessing, than Larry Hagman. He just comes across as devious in this episode, and you just don’t want to trust him.

Jim has a lot of fun posing as an ex-oil man from Oklahoma, but soon gets caught out by Beth’s friend, and the woman who hired her law firm, Susan (Margie Impert). She’s aided in her discovery by some meddling by Angel (Stuart Margolin).

Angel causes a number of problems for Jim and Beth in this episode, and it’s a wonder that their relationships survive it. Everything gets worse and worse until Beth quits the firm she works for, and Susan, who was a college rival for her, ends up almost a bitter enemy.

A good episode that lets Rockford have a lot of fun playing up the role of Jimmy-Joe, investor. 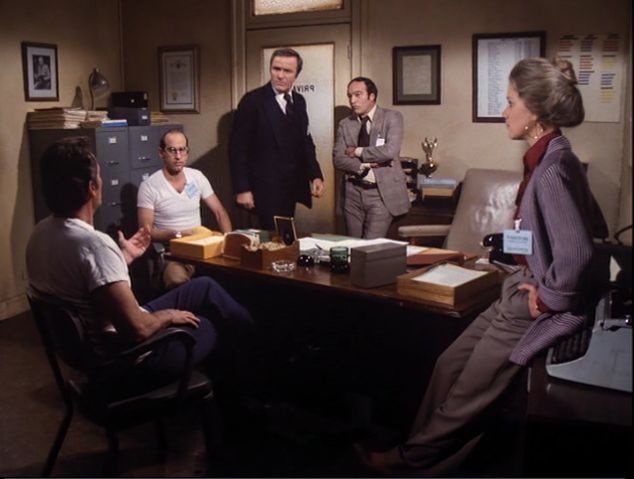 The second episode, The Queen of Peru, is filled with a lot of laughs. Penned by David Chase, it originally screened on 16 December, 1977, and this time around the phone message features a call from the bank, to let Jim know that the money he thought he had, he doesn’t… computer error.

This one starts with a bang right off as Jim and insurance man, Stephen Kalifer (George Wyner) are in the midst of negotiating for the return of a diamond. The crooks demand $1 million dollars, and an agreement and a set-up is made.

Unfortunately, things go hilariously sideways when an a family in a RV camper show up, and throw a wrench in the works.

It seems the thief hid the diamond in the ashes at the bottom of Jim’s barbecue until he can get the money. But, when the RV family, led by Carl (Ken Swofford), mistakenly taken Jim’s barbecue instead of theirs, and then, empty the ashes into some roadside garbage, the mess gets bigger than Jim would like, as he finds out that he and Stephen aren’t the only ones trying to recover the diamond.

There’s also a nice character bit with Kalifer in that he’s a reservist, a lieutenant colonel in the National Guard, and seems to think that Jim is nowhere near as professional and capable as he believes the investigator should be.

To his credit, Jim doesn’t say a thing about his service in Korea, and just lets Kalifer get his karmic comeuppance on his own. Something that also delightfully happens to Carl as well.

This one was just a lot of fun!