Another odd recommendation from Great Movies – 100 Years of Film, for my screening of Pulp Fiction.

A trio of sisters lives interweave with a number of other characters, all of whom are seeking happiness, but are all looking for it in really dark and troubling places.

Joy (Jane Adams) is a struggling songwriter, and just can’t seem to find someone she wants to be with. Her successful sister, Helen (Lara Flynn Boyle) is a writer, who can’t find happiness in the physical relationships she is having. The third sister, Trish (Cynthia Stevenson) is a mom, but her sex life, after years of marriage isn’t what it once was, and she’s not sure she even cares anymore.

Around them is Allen (Philip Seymour Hoffman), Helen’s neighbor, who can only find sexual release by making sexually aggressive phone calls to strangers. Kristina (Camryn Manheim), a fellow neighbor, is a heavyset woman looking for love, and looking right at the unresponsive Allen, who can’t say two words to Helen in person.

Joy makes the mistake of having a fling with one of her English as a Second Language students, and cab driver, Vlad (Jared Harris), and pays for it.

But the strongest and most amazing story, especially in the way it’s handled, is that of Trish’s husband, Bill (Dylan Baker).

Not only that, he’s trying to help his son, Timmy (Justin Elvin) find his own way through puberty, when it seems everyone else in his class is already experiencing it.

As you’d expect things unravel for practically every character, putting them into a much darker place than they were initially in before the end of the movie, and there is a brilliant scene that Baker blows the doors off towards the end of the film where his son confronts him about what he’s done.

The dialogue, the beats, and the performances are simply stunning. It made watching the entire film worth it, not that it was a bad film, but those moments paid off a great character arc, and it’s done gracefully and humanely. Something one doesn’t expect given the subject matter.

A number of the actors take risks in this film with their characters, but each one pays off, and you can tell, that despite the talent in the film, this is not a Hollywood movie. This is the essence of independent film-making, telling stories that may not otherwise get told.

Given its subject matter, this is one that is most definitely not for everyone, but if you are seeking something smart, adult, darkly funny, tragic, and filled with great performances, then have a look. I’ll be interested to hear what you think of it. 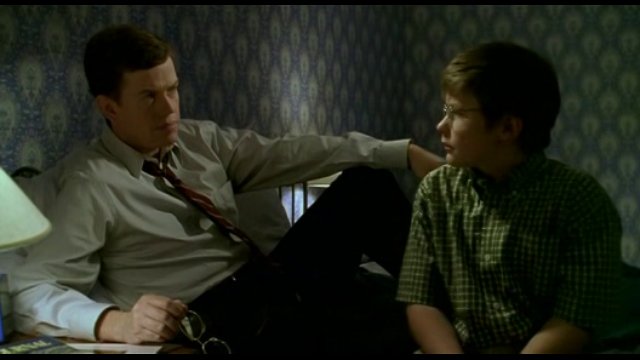