The recommendations from the Great Movies – 100 Years of Film book for my screening of Women On the Verge of a Nervous Breakdown continue with this entertaining Spanish film featuring Penelope Cruz and Javier Bardem.

Cruz plays Silvia, a factory worker in an underwear company, whose mother, Amiga (Diana Sassen) has a bit of a checkered past all to make sure her children never went hungry. Silvia is in love with the boss’ son, Jose Luis (Armando del Rio). He’s in love with her, but his mother (Stefania Sandrelli) refuses to even consider the idea of the two of them getting together.

When it’s revealed that Silvia is pregnant, Jose thinks he may do right by her, and marry her, but his mother will have none of that, and pays the company’s latest underwear model, the arrogant, and rather crude Raul (Bardem), to seduce Silvia, and break the young couple up.

Initially resistant to Raul, Silvia eventually falls for Raul, and calls it off with Jose, unfortunately, Jose’s mother also now has a thing for Raul, and has made him promise not to see Silvia again… a promise he is quite happy to break, as it seems he may actually begin to have feelings for her.

Intercut are some odd moments, including naked bullfighting, a troubling dream, and betrayals of all sorts. 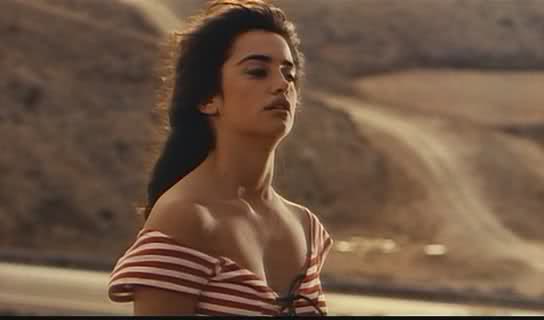 Luna keeps the story moving right to the last frame, when consequences for almost all characters come about, the only true innocent in the film is Silvia, who simply follows her heart, and just wants to be happy. It just doesn’t seem to want to work out that way for her.

Both Cruz and Bardem are incredibly appealing in this film, and they make for a truly scintillating couple.

This film very much does not follow the Western vein of filmmaking, and a number of people may in fact be troubled by its ending. There isn’t a lot of positive there…

While not necessarily receiving top billing, this is very much Cruz’s and Bardem’s film, and they both turn in strong performances, Bardem as the cocky, self-assured, pig of a man, that Cruz’s innocent Silvia seems unable to resist.

I quite enjoyed this one, and honestly by the film’s end, I just wanted Silvia to be happy, but knew that she wouldn’t be content with Raul, or Jose, they were complete opposites, character-wise, and I knew it was going to end badly for all of them…

This one is very well put together, and while not the biggest Cruz fan, I really enjoyed her in this one. This is also the first film in Luna’s ‘Iberian Trilogy’, the others being Huevos de Oro and Le Teta y La Luna. Huevos is actually the next one on the list, so I’ll be watching that one anyone, but does anyone have an opinion on the third one?