The first episode up, Proof Through The Night, aired 11 February, 1984 and was written by Clyde Ware. Deborah Pratt’s recurring character, Marella is back, and we learn Archangel’s (Alex Cord) actual name, Michael Coldsmith-Briggs III.

When a deep-cover agent (so deep Marella thinks it’s possible he’s gone native) in Russia sends news of a dangerous serum that can instantaneously kill, she and Archangel fear a trap, but decide to play it out, by sending in Hawke and Dom in Airwolf (stripped down of her armaments so she can carry additional weight on the way back) to extricate the agent, and his Russian family.

Arriving in the U.S.S.R., they learn that their agent Vladimir (Rick Lenz) hasn’t told his in-laws or his daughter that he is truly an American agent, and his wife and daughter are reticent to leave their home and go to the west. They dally just long enough for problems to arise, as a helicopter patrol calls in ground troops, and it’s up to Sting and Dom to figure a way out without weapons.

Sure there’s some model work, sure Russia doesn’t quite look Russian, and yeah, the stock shots are being reused as well, but I have to say, so far, they really do seem to be pushing character and story. Of course in the 1980s we had a rough and ready baddie in the Russkies, and it made for some good, and not so-good Cold War thrillers.

This one is good fun though. 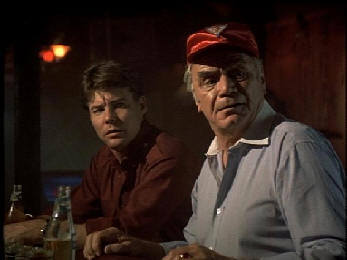 Next up is One Way Express, which shifts the focus to String and Dom’s relationship, and also introduces a narration by Lance LeGault! The narration, is given like a report, and seems to suggest that some people are keeping an eye on The Firm, and Archangel specifically, as they suspect him of aiding Hawke and Dom in their keeping of Airwolf in exchange for their help with various projects.

Dom is approached by Philip Maurice (Henry Darrow) to fly a chopper for a film stunt, that features setting the helicopter down on a moving tractor-trailer.

When Archangel learns of Maurice’s involvement, he hauls String in… Apparently, Maurice, is a world-wide criminal, suspected but never caught, and is planning on using the production as a cover for a huge heist.

Hawke takes over the stunt, but without explaining why to Dom, which puts a strain on their relationship, as Dom thinks String is trying to put him out to pasture. After a blow-up Hawke makes reparations by asking Dom to watch out for him during the stunt, by following them in Airwolf.

Things helps to patch up things between the duo, just in time, because the stunt goes sideways, and Maurice forces String to try to hijack a tractor-trailer, and not just land on it.

Escaping from Maurice, the boys chase him down in the supercopter, and finally bring him to justice.

I really am enjoying catching up on this one, and can’t wait for the next installment!