Bellisario’s next series focuses on the supercopter Airwolf, its pilot Stringfellow (what a terrible name) Hawke (Jan-Micheal Vincent), his mechanic and co-pilot, Dominic (Ernest Borgnine). The two-hour pilot, released overseas as a theatrical film aired 22 January, 1984.

Bellisario wrote and directed the pilot movie that introduces the top-secret organization known as The Firm, which, though financed by the government, they seem to work outside of the law. The series main contact with the Firm is through Archangel (Alex Cord), who is wounded when Doctor Charles Moffet (David Hemmings), during a demonstration of a new high-tech helicopter named Airwolf, steals the chopper and defects to Libya.

Desperate to get the top-secret weapon back, Archangel recruits former Vietnam vet, Stringfellow Hawke, to sneak into Libya and steal the chopper back.

The story marries elements of both Firefox and Blue Thunder (which itself spawned a short-lived television series), Hawke is a bit of a loner, living out in the wilderness playing his cello at the end of his boat dock as he watches eagles soar.

Hawke tentatively agrees to the deal, IF the firm will recover his brother, St.John, who has been an MIA, and possibly a POW, in Vietnam for 14 years.

Stringfellow, in turn, recruits his friend, co-pilot and mechanic, Dominic Santini (Borgnine) to fly with him, and also to scout for a secure location in the desert, as Hawke has a plan of his own…

To keep a hold of Airwolf until the Firm recovers his brother.

Both parts of the series opener focus more on the drama and the characters than any dazzling flying, but for the most part, that works, as it establishes the world the show will exist in. It also shows that the gruff-voiced Hawke can be a bit of a tool, and doesn’t like letting people get close to him emotionally.

Sneaking into Libya, he meets up with Gabrielle (Belinda Bauer), a Firm agent that Archangel brought in to ‘persuade’ Hawke to help. Unfortunately, things go bad when Moffet grabs her, and tortures her while String and Dom sneak into a Libyan palace to steal the helicopter.

And then, with this superweapon, he goes after Moffet for revenge, dodging enemies along the way.

For a series opener, this one is a lot of fun, and it’s amazing how little of the series I actually recall. I can hum the theme by Sylvester Levay, I knew the main characters, but I’m not sure I ever even saw the pilot…

This one should be an interesting ride.

It was also cool to see some familiar Bellisario faces pop up through the course of the episode. Deborah Pratt, who married Bellisario, and would be one of the creative forces behind a number of television series, including my favorite Bellisario series… Quantum Leap.

The aerial photography is good, it’ll be interesting to see how long it takes before the show starts recycling that footage, and the casting is quite good. (Keeping in mind of course that it’s an 80s TV series).

So buckle up, because this is going to be a fun ride! 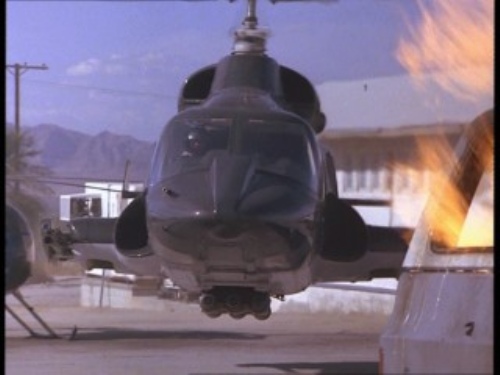