Set in a forest the size of Germany (!), that takes seven hours to reach from the nearest city, this prison, Penal Colony No. 56, is the modern gulag, and for the first time, a documentary crew has been let inside to interview its residents.

We are introduced to Maxim, Timur, Vladimir, Andrei, Mikhail, as well as the Colony’s governor, who himself has been assigned there for 26 years, Subkhan.

After capital punishment was outlawed in Russia in 1996, those who were on death row, are now sentenced to life imprisonment in this remote, and very cold looking corner of the Soviet empire, restrained to a 5 square meter cell in which they spend 23 out of 24 hours in a day. During that time, if the sun is up, so are they. They are not allowed to laze on their bed during daylight hours, but neither are they permitted to go out on the limited fenced in grounds, they simply pace their tiny cells over and over again, dwelling on their crimes and their punishment, modern Rasolnikovs under constant supervision, and the watchful eye of the unblinking security cameras. 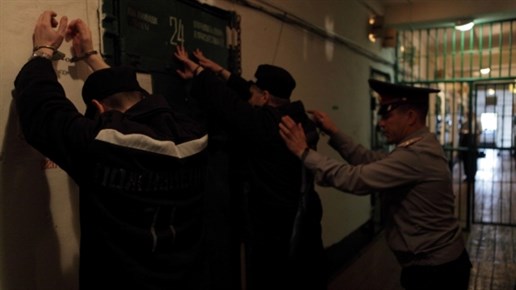 The camera watches everything objectively, letting us see the hierarchy of the prison at work, a glimpse of the emotions that seem to dwell just beneath the prisoners’ exteriors, brought to the fore when some of the receive visits from loved ones. Lifers are only allowed visitors once a year, for a grand total of four hours, and there is no physical contact permitted. The other prisoners have a little bit more leeway with this, including conjugal visits with their significant others, but even those are no doubt closely monitored.

Watching this film, I certainly didn’t feel bad for any of these people, as the governor constantly reminds us, these are murderers, in a lot of cases, multiple murderers, as well as rapists, and chid-killers. They deserve their punishment, though Subkhan laments the fact that they simply aren’t executed. One of the prisoners points out though, that death would be too quick, with their whole life stretched in front of them, knowing they have nowhere to go, they spend a lot of time with their thoughts, and thinking about what they did.

Read’s access to the prison, as well the material he uses paints a harsh and brutal picture of a restrained existence, filled with regret, pain, and no offer of release to the world (for the lifers at any rate), and those who are getting released, have to deal with a new terror, the fear of freedom, of how much the world has changed, and will they have a place in it?

A fascinating look into the Russian penal system, and the people who inhabit it.