What starts out as a lighthearted vacation in ancient Rome for The Doctor (Hartnell) and his fellow travellers changes to all-out adventure in this adventure written by Dennis Spooner.

Airing from 16 January to 6 February, 1965, this was definitely the most humorous story to be featured in the Doctor Who universe at that point. Telling its tale over four parts, The Slave Traders, All Roads Lead To Rome, Conspiracy and Inferno, this one ends up just being a romp, as jokes, narrow misses and influencing history all seem to surround our heroes.

The Doctor, who seems to giggle and chuckle throughout this story, seems to be having a grand old time in 64 A.D. just shortly before the fires sweep through Rome (an idea that the Doctor inadvertently gave to Nero (Derek Francis)). The Doctor and Vicki (Maureen O’Brien) but shortly after they’ve left the comfortable home they have taken over for their holiday, when Ian (William Russell)and Barbara (Jacqueline Hill) are fallen upon by slavers.

Along the way to Rome, The Doctor assumes the identity of a slain musician, Maximus Pettulian, someone Nero is expecting, and is central to an assassination plot, all of which is unknown to The Doctor.

Vicki, on the other hand is simply having a fantastic time wandering through history that she knows only through her studies.

Ian and Barbara are separated, with Ian ending up in a galley, which sinks during a storm. Barbara is taken to Rome to serve as an attendant for Nero’s wife, though it’s Nero who has eyes for her.

Having survived the storm, Ian ends up in Rome as well, but is captured again and put into the arena as a gladiator.

All four of our main characters are, seemingly, always a stone’s throw away from one another, even crossing paths but never meeting up with one another. 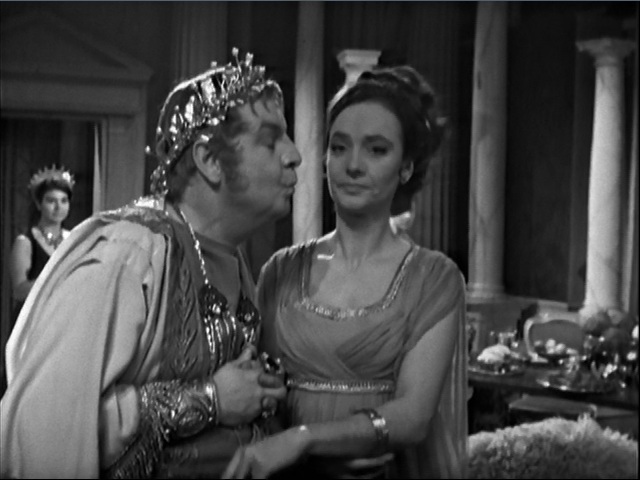 The Doctor constantly outwits everyone he comes across in this episode, and for the first time, really seems to be having a great time. He’s laughing, bandying witty lines about, pointing out historical facts, and enjoying showing Vicki around. He also uses a tactic stolen from The Emperor’s New Clothes to get one over on Nero, though it almost backfires on him and lands him in the coliseum playing to some lions. He also has a moment when he exhibits his skill at fisticuffs!

Ian and Barbara, when they are together, also seem to be having a great time, having resigned themselves to the fact that they may not be getting home anytime soon, they seem intent now on seeing and enjoying as much of the universe they can see traveling by The Doctor’s side.

This one ended up being a delightful adventure, showing that a good Doctor Who story can balance the adventure, the drama and the comedy.

Next week, it’s back out into space when the TARDIS encounters The Web Planet!