Good grief, last week in TV was AMAZING!  I’m still not caught up, and now there are double the number of some shows to talk about, but there are several shows I definitely want to mention, so let’s just jump into it, shall we? 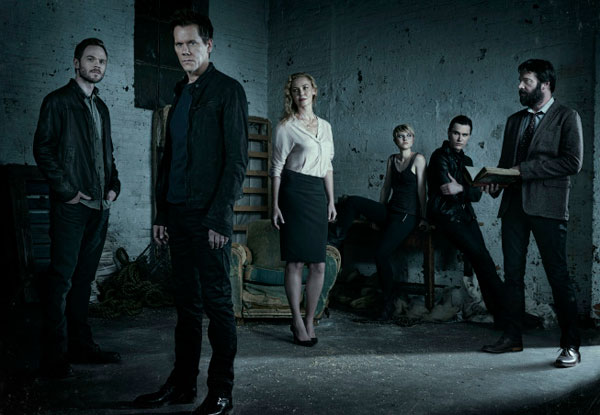 The Following:  It occurred to me once that maybe the lone survivor of the subway attacks, Lily Gray (Connie Nielsen) was the lone survivor for a reason, but then I let that notion go and forgot to be suspicious.  What an incredible reveal scene THAT one was!  One thing after another – Ryan (Kevin Bacon) figuring out that Lily skipped the express train even though she was supposedly in a hurry, the facial expressions on both characters as they each figure out what the other knows, Lily’s escape (including hair and wardrobe changes on the fly), and letting the audience know that she’s the mother of crazy twins, Luke and Mark (both played by Sam Underwood)!  I mean, I should have known, as they’re both so pretty, but yeah…that caught me unawares.  I love that crazy Emma (Valorie Curry) is more fully back in the mix now, too, and that Joe (James Purefoy) is done playing house and being Mr. Nice Guy.  I LOVED every moment between him and Mandy (Tiffany Boone), and am eager to see what happens with that particular pair next!  Also, I loved the version of Stand By Me that was played over the final scenes of the episode.  It was hauntingly perfect, and I couldn’t tear my eyes or heart away from the screen until it was done.  Season Two continues to be strong and compelling television, and I’m even more hooked now than I was during Season One!

Update for this week’s ep:  The scene when Emma saw Joe again for the first time was AMAZING!  So well done, and so honestly acted – it was kind of beautiful, were it not for the fact that they are both serial killers.  That scene in the train station was also pretty incredible, only now I’m worried about Max (Jessica Stroup)!

Teen Wolf – Cheese and rice, tense much?!  Seeing Stiles (Dylan O’Brien) go all dark and firefly-killing at the end of last week’s episode was hard enough, but I just watched this week’s ep last night, and holy hell!  He is KILLING IT this season!  Right from the creepy phone call to Scott (Tyler Posey) and the whole…everything…that happened in the basement, to the end moments that revealed something to us while also bringing up new questions – every scene Dylan O’Brien was in was amazing.  And how about our Lydia (Holland Roden)?  She was woefully missing last week, but more than makes up for it this week with all the awesome/creepy hearing things going on!  Totally confused about her insistence that Stiles was in the basement of that mental hospital, and then not finding him there…was she hearing his dream?  SO WEIRD!  Also awesome was everything between Stiles and his dad (Linden Ashby), and between Stiles and Scott’s mom (Melissa Ponzio).  The tenderness with which she took care of him in the hospital (he called her ‘mom’!  Bless!) last week was topped only by the heartbreaking performances of everyone in the MRI room when they were testing to see if Stiles had the same thing that had destroyed his mom.  So amazing, and added even more depth to a show an season that already has way more than I’d expected it to.  Kudos to the writers and the actors for continuing to keep this one at the top of my Must See list!  I mean, if I had a list.  But I skipped over several shows on my PVR to watch this one right away – does that count?  🙂

Saving Hope – Okay, I already loved this show, but last week’s episode pushed it way up in my already-high esteem.  See, a couple came in because of a bear attack.  I love bears, and the more I learn about them, the more the guy’s story about what happened to his wife didn’t ring true to me.  At first, I was worried that the writers just didn’t know anything about black bears, or that they’d taken some artistic license in the description.  Both of those things are okay, I just didn’t like black bears to have such a continued bad reputation.  So anyway, this guy, Wayne Power (Ian Matthews) tells Alex (Erica Durance) and Charlie that his unconscious wife, Abigail (Liane Balaban), was attacked by a bear that he had to fight off with a pitchfork.  Abigail was rushed into surgery, and Charlie found her “other self” hiding in a different room, desperately wanting to watch TV, and stay away from her devoted hubby, who was keeping vigil as much as he was able.  Though conversations with Abigail and testing theories with Dr. Murphy (Kristopher Turner), Charlie figures out that Abigail was actually kidnapped by Wayne at the age of 12 – he changed her name and kept her hidden in the woods for so long it’s a wonder the poor girl could remember her real name.  Charlie and Alex also figure out that Wayne had been beating her quite regularly, and that it was his violence which led to her landing in the hospital.  There was no bear at all!  So, on top of vindicating bears, Saving Hope gave me a killer storyline to get swept up in, and incredible performances across the board made it easy to do so!  I think Don’t Poke The Bear might go down as one of my favourite episodes ever, actually!  Plus, Liane Balaban is amazing.  I wonder if we can get her on our show sometime?  🙂

Bitten – I’ve been waiting from the beginning for the episode where we’d get to see Clay (Greyston Holt) bite Elena (Laura Vandervoort), and Elena’s first change, and I am happy to say, it did not disappoint!  I loved the flashbacks to the beginning of their Beauty and the Beast-esque relationship.  We’d seen bits before, but this episode in particular gave Laura the chance to shine as both pre- and post-werewolf Elena, and she proved she was up for the challenge.  A change of clothes, a change in the way she walked, and her tone of voice when speaking…the fresh, naive look in her eyes as College Elena – all of that compared with the tougher, embattled Elena we’ve been getting to know just makes her transformation into the only female werewolf all the more poignant.  I loved seeing how uncomfortable Jeremy (Greg Bryk) was before Elena was turned – and yet, he still managed to stay proper and polite, as always.  I loved how paternal he got with her, too, when she was going through the first change, and the advice he gave her, even though he didn’t really expect her to make it.  Even then, he treated her at least as one of his own pack, but with a bit more tenderness than I imagine he showed the guys.  The bite scene was almost exactly how I’d pictured it when reading the book, but if I recall, Jeremy did more yelling at Clay in the book, whereas the scene in the show was played out with more obvious alarm written all over his face, while he still struggled to maintain an air of politeness, which I actually liked even better.  The other scene I loved was between Nick (Steve Lund) and Elena as part of a search party in the woods.  I enjoyed watching them carry on a conversation in normal voices, even though they were several yards away from one another, picking up with their wolf ears everything the regular humans could not.  Plus, how awesome is Nick?  “Pick a fight”, she says.  Fait accompli, Nick!  Like, to the extreme!  He didn’t even try to win, so much as just keep the fight going long enough to let Elena slip away unnoticed.  Even with a bloody nose and ever so slightly ruffled hair, he still looked great, and just might be my favourite wolf.  Maybe.  By a slight margin, if only for that East Village underwear scene in an earlier episode.  😉

Haven – I honestly can’t say enough about this freaking show.  I’m still processing that season finale – and I still have it on my PVR so I can watch it a few more times.  ‘Cause DAMN!  A whole lot happened and now my beloved Duke (Eric Balfour) is bleeding from orifices which should not bleed, and William (Colin Ferguson) got stuffed through the door into another dimension (which scared the crap out of Dave, played by John Dunsworth, but not as much as whichever Audrey replica it was he saw when everyone was seeing that which they feared most in season 2), and Audrey (Emily Rose) isn’t seeming very Audrey-like anymore, as her voice changed a bit and she wants to get William back.  So I’m thinking she’s not even faking being her original self (Mara?  Maura?) anymore.  She doesn’t even care that Duke is dying, and I don’t think she spared Nathan (Lucas Bryant) so much as a glance.  What a cliffhanger!  Thank GOD they have been picked up for a longer season 5!  I love how so many questions get answered, but that things from earlier seasons come back around in new ways, and such.  I’m eager to see if Audrey and Nathan’s son makes another appearance someday.  He went into the barn, too, but is the only one we haven’t seen come out.  Assuming he’s still alive, of course.  Also, does the Crocker Curse affect the daughter Duke can never see lest he risk getting super old again?  What if she’s never around Troubled people, let alone killing them?  Was the Heart of Haven lighthouse the same as the one Duke’s daughter was born in?  The same one the lady who gave birth to her was effectively sealed up in?  Or a different one?  Poor lighthouses.  Didn’t one get destroyed by that guy who manipulated that girl’s art, too?  MAN I love this show!  My brain is constantly trying to tie everything together and predict what will happen next, but it’s never what I expect and is always so much better!  I look forward to season 5, guys and gals!!!