The 101 Action Movies comes to a close with James Cameron’s sci-fi action-adventure epic.

No matter what one thinks of the story, and for me, it was simply a rehash of Pocahontas, again. There is a strong environmental message, one about living in harmony with our surroundings as opposed to pillaging and destroying as businesses and the military-industrial complex that is raping the alien planet Pandora seems intent on doing (sound familiar).

It is on this alien planet, that Jake Sully (Sam Worthington), a crippled marine, gets a new lease on life, as he, through a neurological link, is able to transmit his consciousness into an avatar grown for him, to infiltrate and learn from the indigenous people, the Na’vi.

There he learns their ways from Neytiri (Zoe Saldana) the daughter of the local tribe’s chief, Eytukan (Wes Studi). As he delves deeper into their culture, initially sharing tactical information with the vicious Colonel Quaritch (Stephen Lang), he realizes that what his people are doing here is wrong. The entire planet is connected, one big network, that interacts with all the living beings around it, and the interests from earth are happy to destroy it and force the Na’vi to relocate so that Earth businesses can lay claim to minerals (sound familiar?).

Story-wise, there is absolutely nothing new here at all, which is rather upsetting considering how long some fans were waiting for Cameron to return to the sci-fi/action genre. But the story is secondary, Cameron has always been a perfectionist director, always wanting the best on the screen, and there is nothing but in Avatar.

The visual effects work is still, 5 years later, unparalleled. Pandora comes to life beautifully, with an ecosystem we may not recognize, but it is also undeniable that it works. The settlers with their weapons and vehicles, their tech, it all looks amazing, and each thing has a purpose, if it’s on the screen, it’s there for a reason. 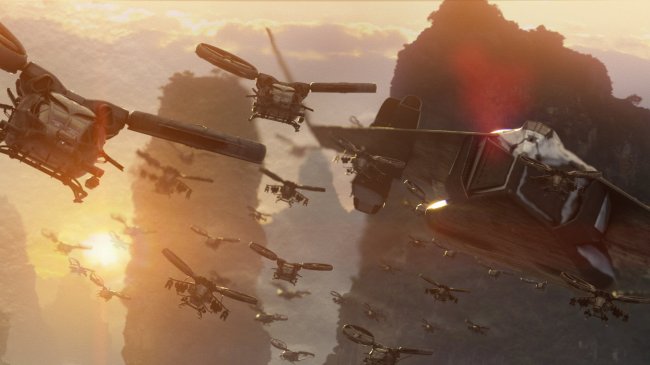 This was the first time I had watched the film since it came out, and while the story still doesn’t wow me, I did get caught up in it, and simply marveled at everything I was watching on the screen.

It was also nominated for a number of Oscars, including Best Picture and Best Cinematography, not bad for a film that is 40% live action and 60% photo-real computer images!

It’s very hard not to get caught up in the magic that spreads through the film, and I have no doubt I will be seeing the sequels, which are slated for 2016, 2017 and 2018 respectively. I’ll be curious to see what Cameron does with the world he created now that he can play in it a little more.

A gorgeous film to end the 101 Action Movies list to end on, and now the hunt begins for new lists, as I continue to explore new to me titles, as well as revisit familiar ones.

What are you watching right now that you think I should check out?