It struck me that I wanted to revisit some television shows, and while I thought about it, I realized there were a couple more names that could stand alongside Spielberg, Lucas and Roddenberry as entertaining me and shaping me as I grew up… Donald P. Bellisario and Stephen J. Cannell.

The tv series that the two of them filled my youth with stories and play that were just as important to me as Indiana Jones, Luke Skywalker and Captain James T. Kirk.

So in 1978, Bellisario was involved in bringing Battlestar Galactica to the small screen. It premiered as a 3 hour event on ABC on September 17. Of course I didn’t get to stay up late enough to watch all of it, but my love of things science fiction, thanks to Star Wars and Star Trek guaranteed that I would watch as much of it as I could.

Unlike the later remake, this series, which only ran for one season, is a little more melodramatic, embracing the idea of space opera which Star Wars had made so popular. The lines between goodies and baddies were clearly drawn, and despite the dire straits the human race was in, you could always count on a happy ending by the close of the episode.

Still, the show`s opening, featuring Patrick Macnee`s narration, and the beginnings of Stu Phillips wonderful theme would send chills through me as a child…

“There are those who believe…that life here began out there, far across the Universe…with tribes of humans…who may have been the forefathers of the Egyptians…or the Toltecs…or the Mayans…that they may have been the architects of the Great Pyramids…or the lost civilizations of Lemuria…or Atlantis.

Some believe that there may yet be brothers of man…who even now fight to survive—somewhere beyond the heavens!“

The Battlestar Galactica is the only surviving warship after a devious attack by the mechanical Cylons, led by an alien being known only as the Imperious Leader (voiced by Patrick Macnee). Aided by the traitorous Baltar (John Colicos), the Cylons wipe out the 12 colonies of man, with the survivors forming a ragtag fleet seen over by the Quorum of Twelve, and Galactica’s Commander Adama (Lorne Greene).

The colonial fleet is seeking out the rumor of a lost 13th colony on a planet known ad Earth all while trying to elude the Cylons. 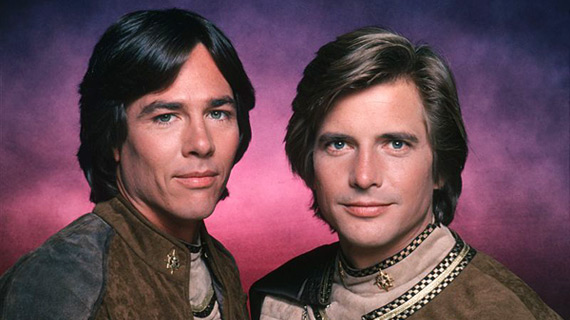 The bulk of the series action comes from Adama’s son the straight-laced Apollo (Richard Hatch), the cigar-smoking, gambling womanizer, Starbuck (Dirk Benedict) – my favorite character (so much so that at the time I told my swimming instructor, no doubt in her teens, that she could call the seven year-old me by that name), and his friend Boomer (Herbert Jefferson Jr.).

A child character, Boxey (Noah Hathaway) was presented as the alter ego for younger viewers, with his robot daggit Muffy (a chimp in a costume). The first episode featured a brief appearance by Rick Springfield, as Zak, Apollo`s doomed brother. 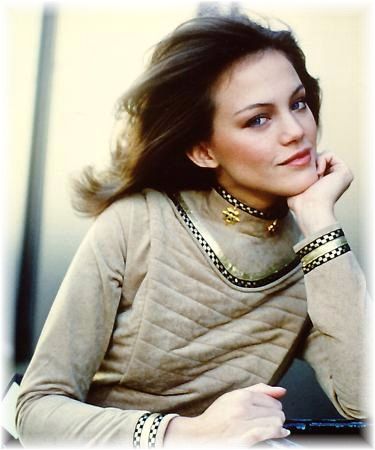 In the three-hour opener, the ragtag fleet, after the brutal holocaust wrought on them by the Cylon forces leave their system, seeking Earth, with their enemies in pursuit. As they flee, they deal with starvation as they learn a number of their stores have been contaminated whilst others are hording them, like their power.

Our three heroes, Apollo, Boomer and Starbuck, after to lead the fleet through a mine field, until they reach the planet Carillon, a planet rich in the fuel, tylium. There are other secrets here though as well, that may threaten the continued exodus of the human race…

Unlike the reboot series, there are aliens scattered throughout the colonies and the universe that this Galactica inhabits, the insect like Ovion peoples, and a number of others populating the background, or singing on stage… 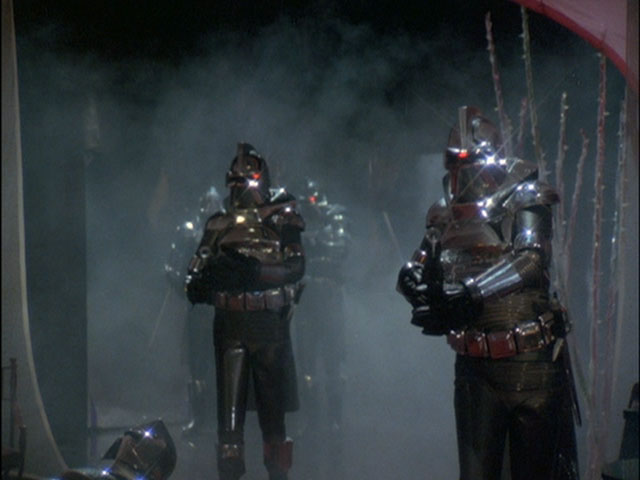 I was completely caught up in the world the series created, the space battles featuring the gorgeous colonial vipers (one of the first model kits that I ever got, though my dad had to put it together for me), the sinister looking raiders, and the massive familiar shape of the Galactica were amazing, the model work were like nothing I had ever seen on the small screen before. Yet, the series proved to be so expensive that as the series progressed they had to reuse the model footage over and over again, but at the time, I sure as hell didn`t notice.

I wasn`t the only one, at recess, I remember kids playing this, claiming their favorite characters as they went around, dodging through the trees that lined the edges of our playing field, blasting Cylons. I would race around on my bike, and when it wasn`t the Millenium Falcon, it would be a viper and I would weave my bike around cars, breaking left then right, as imaginary raiders pursued me until I could outmaneuver them and blast them to pieces. 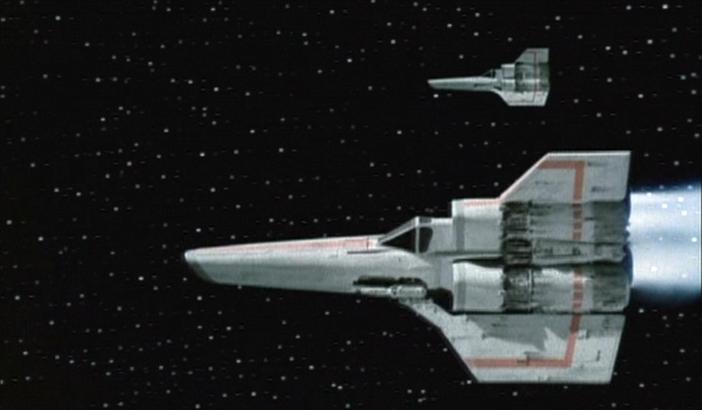 I would button my jacket at my throat, and leave it hanging like a cape, and when my dad asked me about it, as I snuck around the house with my hand gripped around a toy pistol I was using as a blaster, I tried to explain to him that it was supposed to be like Starbuck`s cape on his dress uniform… obviously.

The series, in this incarnation, just wouldn`t work today, the reboot, of course, worked brilliantly. This series is a little too camp, a little too light-hearted, and a lot of feathered hair. It`s too light and happy, despite the fact that these people seem on the verge of extinction every week, they keep meeting more humans, and never seem to deal with the fact that they, as a race have almost been exterminated… the emotional toll of something like that would be unimaginable…

Still, it`s delightful fun, instills me with so much nostalgia, and of course, I still think Starbuck is awesome.

My next Galactica post features a visit to The Lost Planet of the Gods! 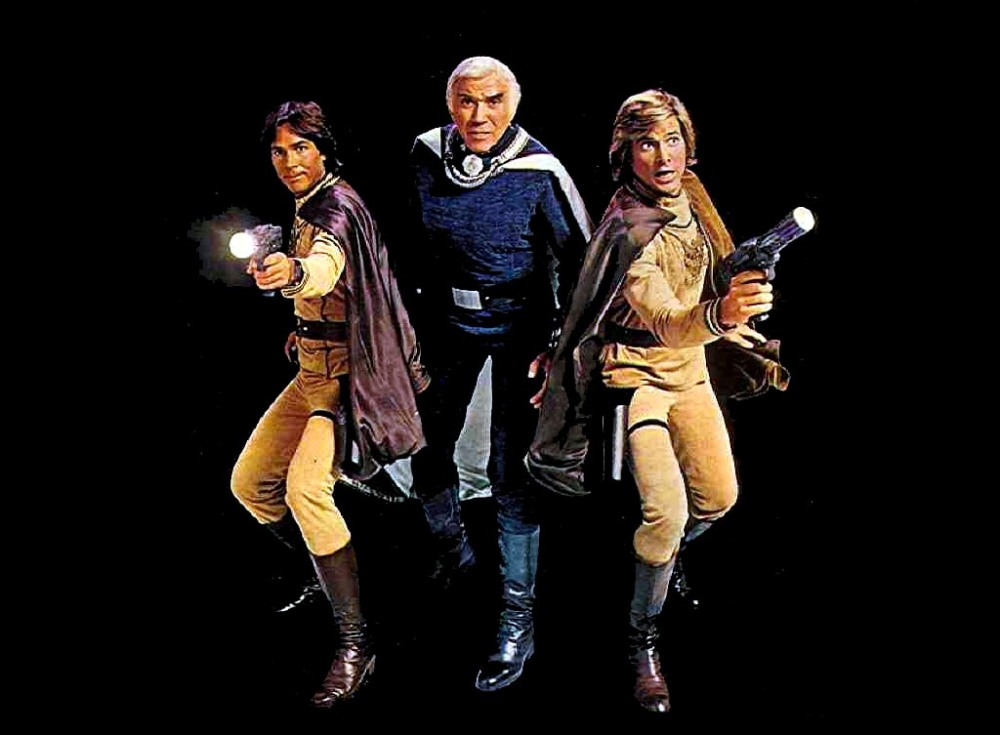