The 101 Sci-Fi Movies list is coming to an end, only a couple of titles left. Alex Proyas, the director of The Crow and Dark City work off of Jeff Vintar and Akiva Goldsman’s screenplay that was inspired by Isaac Asimov’s writing, and incorporates his 3 Laws of Robotics:

The year is 2035, the setting is Chicago, techno-phobe, recently divorced homicide detective with a painful secret in his past, Del Spooner (Will Smith) is called to U.S. Robotics to investigate an apparent suicide by his friend Dr. Alfred Lanning (James Cromwell).

As he investigates, he begins to suspect that a new series of robot, this one named Sonny (voiced by Alan Tudyk) may have in fact found a way around the binding laws and murdered Lanning, though both the robot-psychologist Dr. Susan Calvin (Bridget Moynahan), and CEO Robertson (Bruce Greenwood) try to convince him that it is impossible to circumvent the laws.

But when, in a number of dazzling sequences, Spooner finds himself fending off the new series of robots, we begin to suspect he may be right, and that something bigger may be going on here.

This is a sci-fi murder mystery that is fairly entertaining with some nice sequences, though the toque thing on Smith’s head has got to go.

By pairing us with Smith through the film, we share his phobia and that automatically makes us distrust any of the robots we come across, no matter how helpful they may seem, happily, for the story, not for the characters in it, Spooner’s distrust is well-placed as things are revealed, and the robots seem intent on taking over the human race to better protect us.

It’s a rather troubling, but accurate look at our society, these things are designed to look after us, and not harm us, but we seem to be able to do that well enough by ourselves. 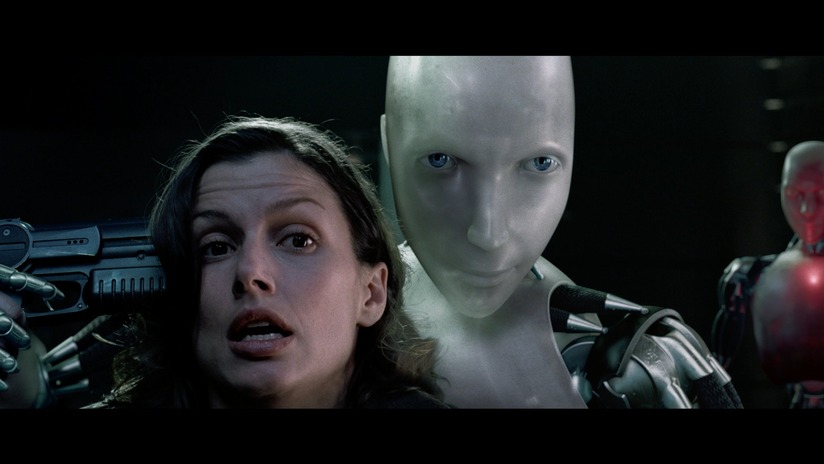 The film itself is glossy looking and very stylish, I quite like the cars, not to mention how they are stored, and a complete different environ from what Proyas gave us in Dark City and The Crow. There is a dark undertone to the film, but it’s so slick and fast-moving that it’s easy to not catch it.

Smith is, as always, likable in his role, but Greenwood is my real favorite! It was nice, as well, to spot Aaron Douglas as an extra in one of the scenes with Greenwood and Smith. He’s awesome, and if he’s ever in town, so needs to come on our show!!!

I have yet to read Asimov’s Foundation novels, and am always unsure whether I would like them or not. Any recommendations on where I should start with Asimov’s books?