Wolfgang Petersen is back on the 101 Action Movies list, and this time he’s joined forces with Harrison Ford, who portrays U.S. President James Marshall.

On their way back from Moscow, where Marshall unveiled a tougher stance with their foreign policy, a barely vetted Russian news team, led by Korshunov (Oldman) joins the press cabin, and with a little help from a secret service agent, gets access to weapons and seizes the plane, holding all aboard hostage until General Ivan Radek (Jurgen Prochnow) is released and allowed to take control of the country.

Turning into a one man rescue team, this president, who was also awarded the Medal of Honor for his service in Vietnam wages war on the plane, while his cabinet and family are held hostage. 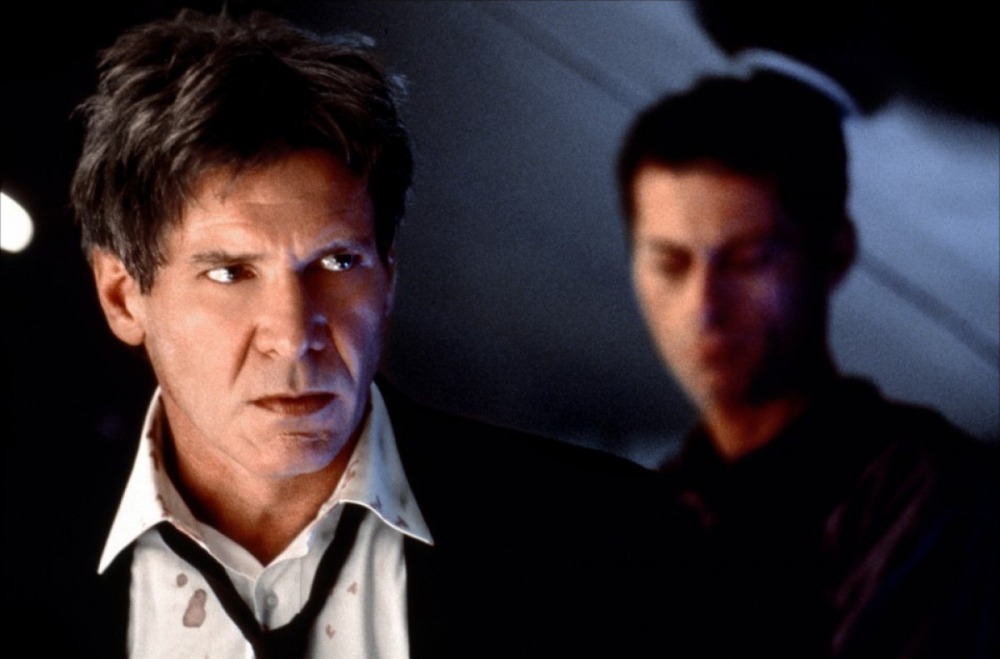 Meanwhile on the ground, the Defense Secretary (Stockwell), quite rightly recognizing that the President is under duress, begins an action to have him removed from office so that the VP (Close) can take over.

Marshall moves through the holds of the plane, as he begins to pick off Korshunov’s men one by one, until the two of them are face to face, battling it out on the edge of the plane’s open ramp.

While the politics are simple, the baddies easily identifiable, the film engages thanks in large part to its amazing cast.

The score, was done by the late Jerry Goldsmith, though he only developed a number of the themes for it and was actually Joel McNeely who completed it. I was always a sucker for a good Goldsmith score, though Alien is my favorite.

Looking back at the film now, it’s terrifyingly easy to pick out all the CG work, and I can’t help but wonder if I didn’t notice it when I was younger (unlikely) or I just didn’t care because Harrison Ford was kicking ass (more likely), but almost all of the stuff with the exterior of Air Force One in flight is blatantly CG work. Still, I suppose if you’re along for the ride and have already hit your suspension of disbelief button, what’s a little awkward CG?

It’s always fun watching Harrison in the action role, and it seems the more askew his hair and tie goes in this film, the madder he is, and there’s no stopping him!

The film is tightly paced and moves at a lightning pace, allowing you to overlook the film’s shortcomings and just enjoy Ford being the hero and the president, which to be honest is the real draw in the first place, isn’t it? I mean I would certainly have voted for him!

This one is a great one to just throw on in the evening, grab a bowl of popcorn and settle in for a fun ride. It’s not claiming to be anything it isn’t and its sole purpose is to entertain, and it does that just fine.

After Han Solo and Indiana Jones, what is your favorite role for Harrison?