Since I’ve been abysmal at keeping up with recapping each episode this season, I thought I would just leave it until the finale and talk abou the whole thing at that point. But THEN I watched episode 9: Reckoning, and it was all I could do to not start a post while I was watching it! What an incredible episode – adding to an already amazing season! Holy crap!
AND it was directed by none other than Jonathan Demme (Silence of the Lambs), which made me extra excited to watch it right out of the gate! Because if anyone can make this crazy dark season even crazier and darker, it’s the man who directed one of my favourite films of all time. And he did not hold back.
The entire episode – like the season itself – has been a roller-coaster ride of emotions and events. I find myself wanting to go back and re-watch every episode after it airs – not just for clues which may or may not be there, but more for the sheer enjoyment of it. And to try and take it all in. Every episode has been full of character development and suspense, as well as quick little throw-away moments between our two favourite detectives. Joel Kinnaman and Mireille Enos have always made a welcome impression on my TV screen, but this season has given both of them the chance to turn in an acting tour de force as Holder and Linden, and both have risen to the occasion each and every time. If I didn’t already love watching them together, this season would have sealed the deal.

And this week’s episode is rocketing us toward the finale (only two episodes left!) while somehow making it feel like a bandaid is being pulled off slowly – and we’re bracing now for the inevitable big rip. Things I loved: Holder racing to get to Linden in the storage building; Linden racing to get to Holder before he opened the trunk of the taxi; Seward’s (Peter Sarsgaard) slow descent to his breaking point; the random and creepy moment at Becker’s (Hugh Dillon) home as he watches his very calm son being led away in handcuffs (reminded me of that other random and creepy moment when Becker showed the kid how the gallows work); Danette (Amy Seimetz) passing out missing posters for Kallie (Cate Sproule), even though you can see in her eyes that her hope of finding her daughter alive is fading more each day; Shannon’s (Nicholas Lea) disturbing laugh once he realized he’ completely broken Seward down; Holder looking in the trunk, and his breakdown later over what he saw in there. 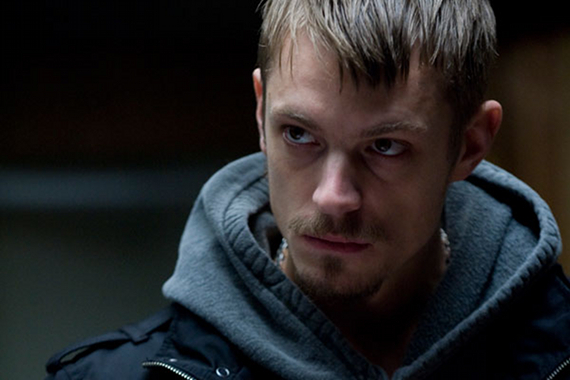 Ah, Bullet (Bex Taylor-Klaus), I wasn’t sure about you at first, but Taylor-Klaus injected you with so much REAL-NESS, you quickly established yourself as a favourite. Broke my heart to see your photo on the wall. You’ll be missed more than you’ll ever know. I’ll even miss Danette screwing up your name and calling you ‘Trigger’, because that made me laugh.
And apparently you’ll be missed more by fans than by freaking Lyric (Julia Sarah Stone), because MAN, that girl has done a 180 or so this season! I was with her all the way up to the moment I found out she’d lied to Bullet about the Pastor. I couldn’t figure out what was going on. She goes all sleepy-eyed and says Bullet will be there any moment, the ice cream is still on the table, they find the Pastor’s bloody car at the train station (but what about the rental?) and assume he’s made a run for it (but again…he had a rental – his bloody car was parked at the station for at least a day or two, since that girl was dropped of at the vet), Bullet freaks out and tells Holder that the Pastor took Lyric, and then we find out that Lyric lied about the whole thing. Really? She’s kind of an idiot, pulling something like that when an investigation into he friend’s disappearance is going on. And then we saw more emotion from Twitch (Max Fowler) over the loss of Bullet, whereas Lyric…I guess she’s still waiting for it all to sink in.
It sunk in hard for poor Holder, though. 😦

Okay, so on to theories. Bullet said she knew who the killer was. I’m assuming she got it from the girl who’d escaped and Bullet bribed her with drugs in the hopes of redeeming herself with Holder and to help Kallie somehow. We saw the car pull up outside the diner, and knew it wasn’t going to go well for young Ms Bullet, but the lack of detail surrounding her when she was found in Joe’s (Ryan Robbins) cab trunk makes me wonder if she was killed the same way that the others were, or if this was more a killing of necessity, to maintain the secret of the killer’s identity.
I don’t think it’s Joe Mills, though that disgusting rant he made to Danette was not really in keeping with his whole, “I didn’t do it” plea. Just sayin’. Maybe not the brightest bulb, that Joe.
I don’t want to think it’s Holder’s partner, Reddick (Gregg Lee Henry), in part because I like him, and in part because it seems too easy, in a way. I’m also not sure there is any connection between him and the Seward case but, like Linden, I think the killer in both instances is the same. I know Reddick found and handed over the box of rings in the storage unit, but he was really excited. I think if he’d planted it there, he would have let someone else “discover” it. 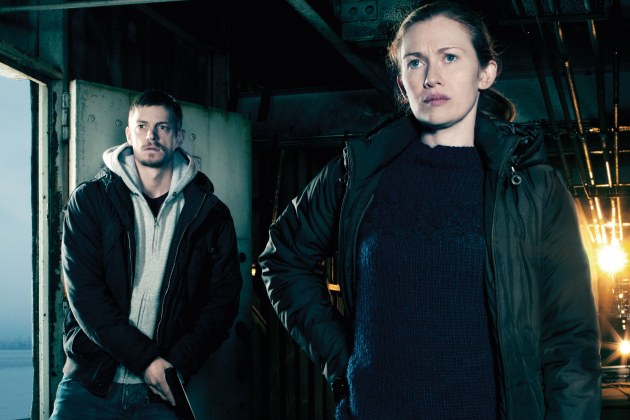 I do, however, think the killer might be a cop. I think that’s why the girl who escaped wouln’t go to the police. I think that’s how bodies can turn up in taxi cab trunks and rings can appear in storage units an the one girl who’s disappearance ignited the haste required of the investigation can still be missing this far in. No body found with the others, no living girl turning up safe and sound. And the fact is, we saw Kallie get into a car (which I don’t think looked like a cab, actually), and it took her only a moment or two for her to decide to get in the car. It was someone she trusted. Which could also have been Joe Mills, but we also saw another girl get into a car to start the season off, and chances are she would NOT have trusted creepy Joe.  I also think it’s someone we know, because there hasn’t been a whack of new suspects being introduced each week this time around.  Unless the reveal gives us someone brand new, with only 2 eps left, I think we’ve been getting to know the killer this entire time.

My whole theory really stems from my confusion as to why Linden’s ex-partner/affair, Skinner (Elias Koteas), has kept brushing of her concerns and theories this whole time. A serial killer with the same MO as used in the Seward case (which they worked together) crops up right before Ray is to be executed, and that doesn’t at least warrant a delay? Skinner said from the get-go that he thought Seward was guilty – even pushed for the conviction on the original case despite the fact that Linden wasn’t convinced he was their guy. Now suddenly he says he believes her, but he’s stood in the way of every warrant, every posed plan, every question Linden and Holder have asked along the way. I keep wondering why he’s so stubbon about even entertaining any of the notions brought forward. But if he was the killer, he’d want to make sure the investigation were controlled.
As an aside, did Ray Seward only get convicted of killing his wife? Or were there others then, too? Because the death penalty seems a tad severe for one murder. Now there’s either the same person or a copycat going around killing tons of girls, the same way, taking the same trophies and has possibly been active this whole time, but no one noticed because they were street kids, and Skinner’s on the news saying they’ve caught the guy without even crossing his i’s and dotting his t’s. If this killer is also to receive the death penalty upon conviction, you’d think he’d want to make sure nothing would go wrong that would allow Mills to get off without being convicted. AND it should at least be enough to get Seward a stay of execution, since Skinner didn’t know yet that Mills was out of town when the Seward woman was murdered. 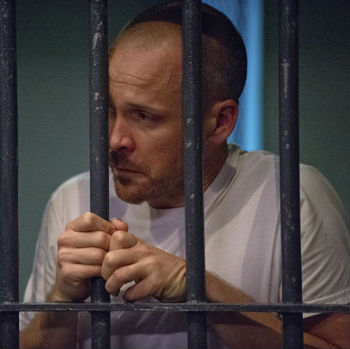 I don’t know, I could be wrong, but Skinner has seemed a little too quick to pull the trigger on arresting and charging people without first making sure all of his ducks were in a row. I understand wanting a quick solution, but Linden had doubts with Seward which went ignored by Skinner, and even though she’s the one who linked the cases (using Adrian’s pictures, I might add, which also should at least give Skinner a pause, since Holder picked up on the similarities right away) and found all the other bodies that weren’t that first seemingly random one, Skinner kept telling her there was no connection. Now he says he believes her certainty that Seward didn’t kill his wife, and yet when he finds out that Mills wasn’t in town at the time, it won’t make him doubt that they have the wrong guy again. He’ll just go back to the notion that Seward’s case was separate from the current murders all along, tell Linden to drop it, and let Ray hang.

So there you go. My main suspect is Skinner. He and Linden are connected to both cases, if nothing else, so the fact that one sees frightening similarities and the other professed not to for 90% of the investigation makes me think he’s been the guy all along.
I don’t even care if I am right or wrong, to be honest. I just can’t wait to see how it all plays out and, at the same time, I really don’t want it to end!
The Killing airs Sundays at 9pm on AMC 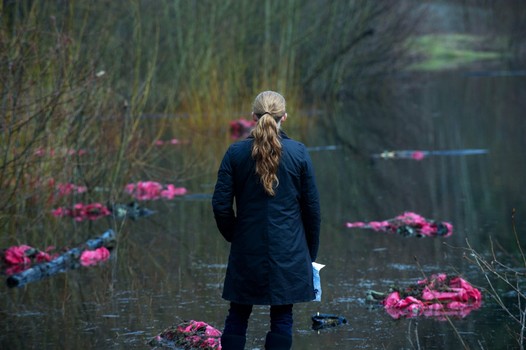