My first Hot Docs film of 2013 was a beautiful Danish/English piece about a group of artists and scientists who get to explore an area of north-eastern Greenland, a location usually inaccessible due to ice and glaciers, but with global warming, they have a window of time that will allow them to see sights rarely seen by man.

I love seeing a map that has regions marked ‘unexplored’, it fills me with a sense of wonder and excitement  I’ve always delighted in the thrill of discovery, and the idea of journeying north, on a three-masted ship, it puts me in mind of Patrick O’Brian books.

Part gorgeous travelogue, and part discussion of science as art, and art as an exploration of who we are, the film catalogs the journey and discussion of an eclectic mix of scientists and artists, as they see this newly opened region for the first time, and bring their own unique perspectives to it.

In turns dramatic, thrilling and humorous, the film is simply amazing to look at it as each of our fellow travelers share their thoughts about life on the planet, our interaction with it, and the need to see a polar bear.

There are moments of discovery, the hints of stone age man living on these forgotten shores, the power of nature as icebergs, and glacial walls loom like ever-watchful sentinels – in an almost threatening way, glimpses of wildlife with no fear of man, from birds to an arctic fox.

With the perfect mix of science and art, the film is accessible to every viewer, and the imagery is simply stunning. Coupled with a brilliant soundtrack that at times just fades completely allowing one to lose oneself in the images alone, clouds curling around mountains, underwater shots from the bow, or from the crow’s nest as the ship tackles increasing ice floes.

Dencik has crafted a film of eye-popping beauty, letting us revel in a world that man no longer exists in, and is very much an intruder.

There are moments when the grin on my face spread so wide, as I reveled in the beauty and the adventure these fortunate souls were having, the grandeur of the landscape, the zodiac-turned-glider, and shots of this beautiful 3 masted ship against stunning backdrops.

This is one you need to see on the big screen to admire the sweep and scope of the image. It’s a true adventure in the best tradition of National Geographic films.

It was the perfect start to Hot Docs for me, putting me right in the mood for more

Expedition to the End of the World screens twice more, Sunday April 28 at 3:30 at the Bloor Hot Docs Cinema, and Saturday May 4 at 6:30pm at the Bloor as well. 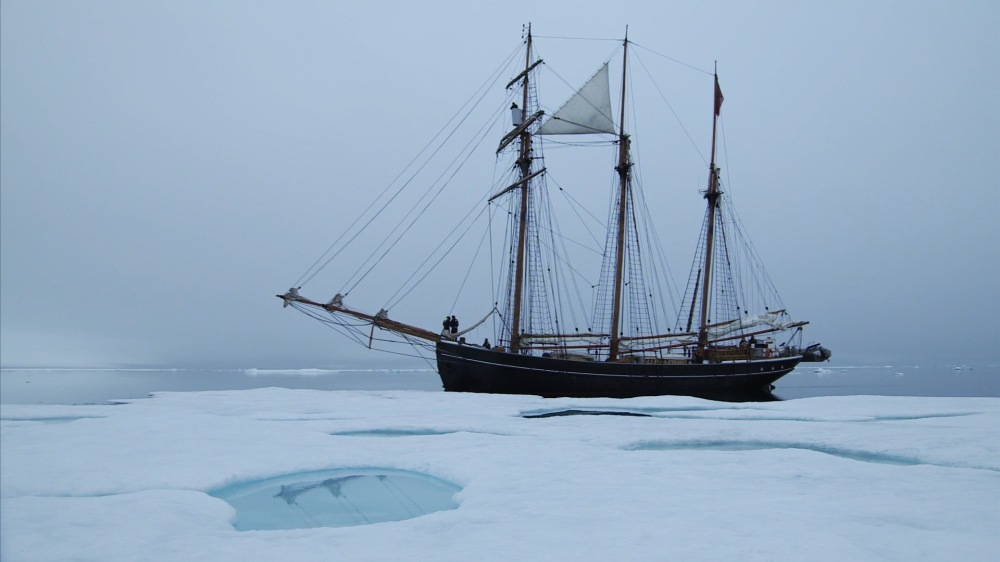