Every so often, I deliberately choose to do something that I know is going to frighten, upset or otherwise unsettle me, but I usually do it anyway.  Call it challenge, call it growth…call it stupid, if you want.  But I do it.  Most often, this pushing of myself comes in the form of a book or a film – something I can engage with in relative safety, so that I know deep down inside that I am in no physical danger, and thus allow myself to more fully immerse myself in the experience, whatever it may be.

Egypt’s Cairo 678 is one such example.  Beautifully shot, the film follows the intersecting stories of three different women in Cairo, and how they deal in their various individual ways with the rampant outbreaks of sexual harassment and assault across the city, country and – to a lesser degree – around the world.  The stories all seem to be isolated at first, but what we quickly come to realize is that they belong to all of us – as women, and as anyone who truly loves us.  When something happens to one, it happens to all, and until we can stand together and present a united front, it will never truly end.

Seba (Nelly Karim) teaches a free, one day self-defence course for women however, while she’s never at a loss for students, all of them deny every having been a victim of sexual assault and, at the end of every class, they all file out silently into the city streets once again.  At least one of them, Fayza (Bushra), continues to show up and attends for weeks but, like the other women, also claims to have never experienced sexual harassment of any kind.  She is just there to learn how to defend herself.  Seba tells her that she can use even something as simple as a pin, should she ever need to, and instructs her not to return to the class, as there is nothing further she can be taught.

Fayza takes the pin suggestion to heart, however, and the next time she gets groped on a crowded city bus, the perpetrator cries out in pain, and accuses her of being crazy.  He doesn’t let her utter a single word, lest he get caught in his unspoken transgression, and for a moment it looks as though he could actually talk Fayza out of standing up for herself.  Instead, she becomes more determined than ever to not let anyone touch her inappropriately again, and soon men are dropping to bus floors all over the city, with a mysterious cut to their groin region, and all without any idea as to why they would have been attacked.

In the meantime, another woman, Nelly (Nahed El Sebai), who is an aspiring comedienne, is attacked by a man in a car while she’s crossing the street.  In a rage, she chases the car on foot, and stops him long enough to pound on the windshield and draw a crowd.  Refusing to back down and let him get away with it, Nelly charges the man with sexual harassment – something that has never been done before in the history of Egypt.  Suddenly, the entire country is talking about the sexual misconduct of men, but not in a way that can been as serious or supporting of the women.  And the docket number for Nelly’s case?  678. 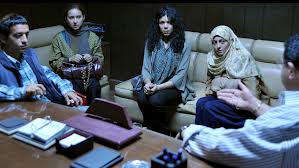 Seeing these women try to stand alone amid public backlash from even their own husbands and families is difficult to watch.  But seeing how many more women hold their silence and, in effect, turn on one another, is devastating.  The entire cast brings this story to life, but it’s the three lead women – all of whom are stunning to watch – who give the film its emotional heart.  It’d be one thing if it was just a movie, and not really happening.  Or even if it were happening someplace else, and to someone else.  Egypt didn’t have any formal legislation for sex crimes until more recently, it’s true.  But even after laws were put into place to protect women, very rarely are they ever invoked.  and can anyone really say that things are that much different here?  “It was crowded, we’re packed together like sardines.  You’re crazy if you think I didn’t just bump into you by accident.”  How many women report every time they get grabbed inappropriately?  How many women are raised to feel they owe their husbands a certain matrimonial duty, whether they are in the mood, or not?  how many dress to feel pretty, and then are told that they deserve what they get for dressing a certain way?  The crimes are often as much in the attitudes of the public, and those attitudes – while changing slowly – are still as much to blame for what the perpetrators do, and for what the victims don’t do.  Women continue to turn on one another, compete jealously with one another, when what we should be doing is standing together and supporting one another.  Until we can do that ourselves, how can we expect anyone or anything else to change?