Now this is a sci-fi movie! It has a score by the incredible Jerry Goldsmith, and has the incredibly lovely Jenny Agutter, and it’s set in the 23rd Century…. Things are great, until you turn 30 that is.

The 101 Sci-Fi movies brings us this fantastic film from Michael Anderson, based on the book by William F. Nolan and George Clayton Johnson. This is a cult favorite, but like most people, I think that the first half of the film is a lot of fun, but the second half is a little clunkier, but Agutter is there to keep me suitably distracted.

In this world, everyone lives inside, a perpetual mall culture made of consumers, and cheering on their renewal hopefuls at carousel. Michael York is Logan, a Sandman, who terminates runners, those who turn 30, indicated by a flickering jewel in the palm, when they flee instead of attending carousel.

He and his best friend/partner, Francis (Richard Jordan) love their jobs, and revel in all that they are given including their choice of women in the city. When Logan is assigned to find “Sanctuary” to find missing runners, he is forced to go on the run himself, his own clock fast forwarded to red.

His friend sets off in pursuit of him, unflappable and unstoppable, and Jessica (Agutter) helps Logan with his escape.

The model-work, is sadly, very evident, and the ‘futuristic’ sets are kind of not, but the story is still a lot of fun. The chase sequences are great, there’s a cameo appearance by Farah Fawcett, at the height of her fame, a psychotic robot, and the illustrious Peter Ustinov.

It’s a marvelous little film, and I love the bit where Jessica proclaims that she hates Outside and their wonder at seeing the sun for the first time.

Francis and Logan square off in the remains of the capitol building of the U.S. Congress. I’m sure there’s a commentary there as well… Not to mention one, where Logan beats Francis with a flagpole waving a ruined American flag.

Logan, Jessica and The Old Man (Ustinov) head back to the city to show them that carousel and renewal are a lie, and showing that there is more to life than the 30 years they have been living, that they can age, live, see and learn more… But no one wants to listen, they are so trapped in the confines of their sensualist and hedonistic lifestyle that they don’t want to hear it.

The computer that assigned him doesn’t believe his report, and in classic fashion, short circuits itself out of existence, taking most of the city with it.

Not entirely, because now, with no set guidelines, they have to establish a whole new set of rules, and a whole new civilization  Maybe there’s hope after all…

Goldsmith, who was always a brilliant choice for composer, gives us another fantastic score, when we first enter the world of the Arcade, the music has a lot of tones and futuristic noises mixed in with it. When Logan and Jessica behind running, the score takes on a sense of adventure and grandeur, all the future sounds are lost when they step outside.

I’ve seen this film countless times, and still enjoy it, having said that, I’ve never seen the television series that sprang from it. Have you? Did you read the book? 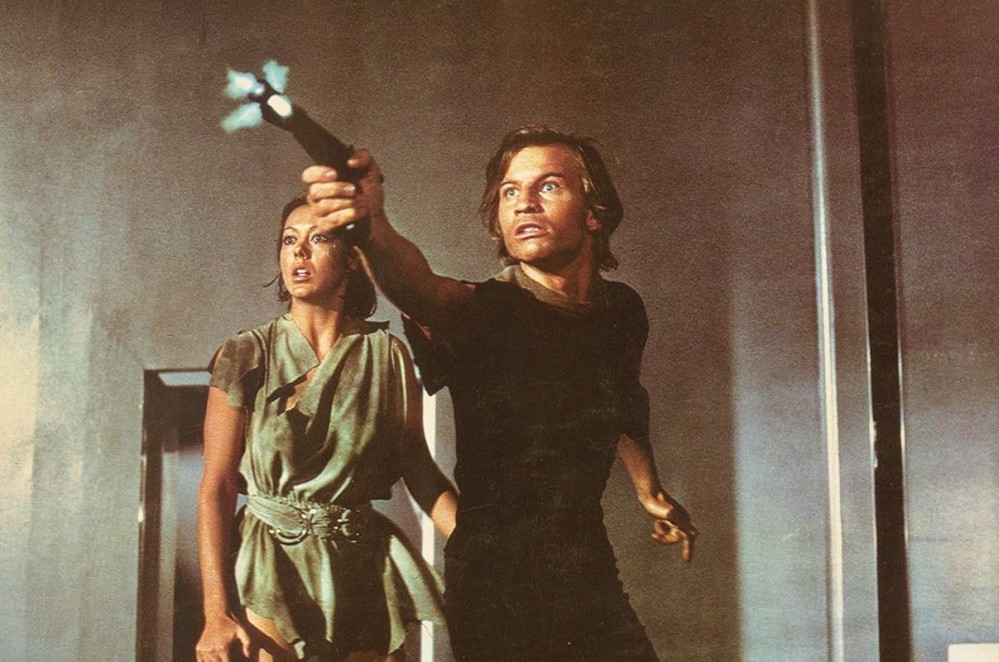